Let's think of the storytelling form of K-drama as a labyrinth.  A labyrinth is not a maze. Rather, it is a path that winds in and around itself, never getting lost.  It is a single path, with no dead-ends. We would not have to train rats to run a labyrinth. That is why they are so good for meditation.  It is a sure path, taking you somewhere. You can depend on the path and let your monkey mind rest. 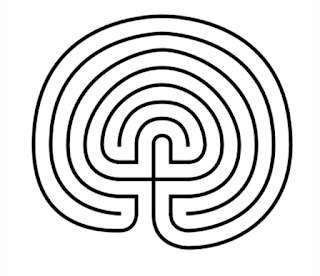 A key to a labyrinth is that there are turns. Each of people in the K-drama is, we might say, walking their own labyrinth, and turns come up.  In this classic 7-cycle labyrinth, you can follow the paths and see that you have to turn.  What makes it possible to turn?  In Chocolate, a lovely story about two highly traumatized people who make their way to one another, Lee Kang, the hero, literally turns and grabs the arm of Moon Cha-young to confess his feelings for her.  But before he turns, we have seen the slow movement of his feelings, from icy cold to passionate.  It is the discovery that she is his first love that breaks the final barriers.  It is a moment of grace for him, as he asks a series of questions and learns that they'd met before as children. It permits him to breathe.

A little later that evening, he silently acknowledges that he can't push her away, this person who is so important to him.  And he turns.  What is fascinating in scenes that follow the turn is that he starts to smile and laugh.  He reveals his passion.  While he had been a smoldering icon -- one woman described his as a perfectly proportioned statue, Michelangelo's David -- he becomes a living rock star (which the actor actually is).

Moon Cha-young still has trauma to resolve, so she says she needs to go away. He says, "Don't get lost." She sends him a text expressing her love and says, "I have never gotten lost because you guide me."

One commentator complained that she wanted to see more of the couple when they have finally come together. While that would be fun, as they are a sexy and adorable couple, that's not the story that's being told. The story -- from their childhood encounter, through their traumas, to their healing and reconnection -- is one of hope, and it ended there, reminding us to eat lots of good food!  Wow, what a set of ending scenes!

Posted by Mindy Thompson Fullilove at 8:20 AM