Neighborhoods and Forces of Change

A brilliant site, called Retrographer, has been taking historic photos of Pittsburgh and linking them to photos of what the same place looks like now.  It is remarkable to see the transformation of the city.  For the Hill District, the forces of change have included urban renewal, disinvestment and gentrification.  We can see how the lively neighborhood was undermined and crumbled between the the 1950s and now.  These two photos are one example of the interesting comparisons you'll find at the site.  They include the Google map, so you know exactly where you are.  In this case, at the western edge of the urban renewal area. 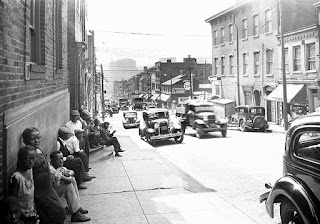 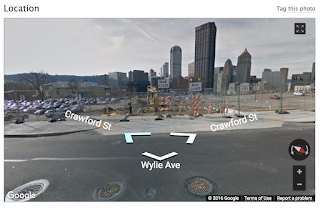 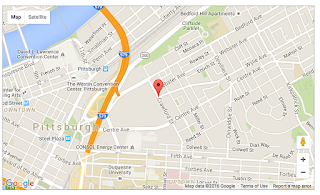 Posted by Mindy Thompson Fullilove at 6:17 AM No comments:

The federal program of highway development showed little concern for neighborhoods, especially those of poor and working people.  Brian O'Neill in a March 2016 column in the Pittsburgh Post-Gazette wrote about the East Street Valley, a neighborhood leveled for a highway.  Bill Gandy and others of those who lost their homes have organized a small museum, dedicated to collecting and showing photos of what was lost.  Between the displaced families and the historical collections, the little museum has access to 100,000 photos, helping to recreate a visual record of what was lost.
Here's what the neighborhood around the new museum, at 433 E. Ohio Street, looks like, with a healthy serving of highways added: 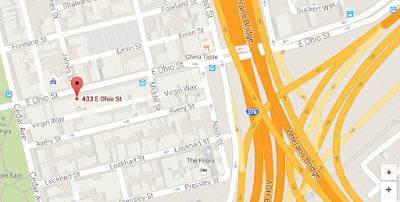 US Transportation Secretary Anthony Foxx has been outspoken about the damage that the federal highway program did.  He is from Charlotte and cited the story of Brooklyn, a downtown black neighborhood that was destroyed by urban renewal and highway construction.  When Foxx was growing up in Lincoln Heights, he knew he couldn't ride his bike far because of highways pinning him in.  He was quoted in the Washington Post as saying,

It became clear to me only later on that those freeways were there to carry people through my neighborhood, but never to my neighborhood.  Businesses didn't invest there.  Grocery stores and pharmacies didn't take the risk.  I could not even get a pizza delivered to my house.

He showed a dramatic set of maps of the ways in which Charlotte moved poor and black people out of the center, to the periphery of the city.  In these maps, the blue areas indicate that greater than 30% of the population was low income, while the red areas had less than 30% of the population in that income bracket.  The "sorting" of Charlotte, including the role of redlining, urban renewal and highway construction, has been brilliantly described by historian Thomas Hanchett, in his landmark book, Sorting out the New South City. 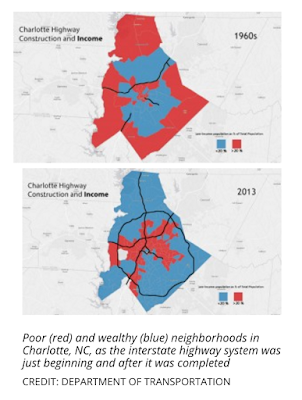 Posted by Mindy Thompson Fullilove at 6:04 AM No comments: