People Matter: The Human Impacts of Planned Development, a global symposium held at MIT this weekend, was a welcome conversation held on the 50th anniversary of the publication of Marc Fried's landmark paper, "Grieving for a lost home." Fried's paper had a major influence on my work. It was the basis for my argument that place attachment was a fundamental psychological process linking people to their near environment, and that the disruption of that connection could lead to the psychiatric illness, nostalgia. The fifty years of work since Fried and others demonstrated that people suffer when they lose their homes has brought extensive corroboration of those observations, but no let-up in the pace of displacement, and all the psychiatric and medical complications that follow. This has serious implications for the future. The UN predicts that we will build 900 billion square feet in the next 15 years. As Don Chen of the Ford Foundation put it, 60% of the built environment we will have in 2030 has not yet been built. That building will move people one way or another. We urgently need this discussion of the implications for human communities, which are fragile and do not tolerate moving very well. It's all well and good to proclaim that people are "resilient," but in fact, they really prosper in communities that are swathed in generations of connection to the land. Generations means decades -- time -- in place. That can't be bought or manufactured -- it has to be lived, together with other people, and in light of the intricacies and particularities of place. Given such massive shifts as global warming and massive construction, we need an equally massive interdisciplinary conversation, based on a real respect for ecology. Dr. Martin Luther King Jr. taught us about the "interrelated nature of reality" which means that "I can't be what I ought to be unless you are what you ought to be." We have a lot of homework to do to really master this lesson and to bring every profession, every religion, every community, every person into this ecological conversation for the 21st century.
Posted by Mindy Thompson Fullilove at 5:42 AM No comments:

William Morrish, professor at Parsons The New School for Design, told me that, while in La Jolla at the American Institute of Architects' Board Meeting, I should see Rudolph Schindler's Pueblo Ribera. The AIA was taking us to see The Salk Institute, Louis Kahn's masterpiece and surely a wonderful place to do science. Schindler's project was down the way, along the beach. Not a "Cathedral of Our Culture," as apparently Robert Redford, himself a sufferer from polio, has dubbed Salk's Institute, but some modest houses, close to the rocks and surf. I needed a ride and asked Julia Donoho AIA, an avid architectural historian and critic, if she might like to go. Carl Elefante FAIA, whose practice focuses on historic preservation, joined us. I like traveling with architects, as they know how to pack cars, find their way, get to the best restaurants, and interpret buildings. As we drove up to Gravilla Street, I was searching for the number on the left. Julia, looking to the right, said, "I see architecture." Schindler's buildings were definitive and distinct. Its pleasant neighbors were cast in the shade by its cool design. Carl explained that Schindler, working in the 1920s, had a great influence on the emergence of American modernism. When other modernists arrived from Europe, Schindler was already busy showing the way, working with new forms and new materials. His use of teak, concrete and open spaces overlooking the ocean foreshadow the essence of Salk, although Salk is meant as a grand statement, and Schindler's Pueblo Ribera was an inexpensive set of beach shacks. But both mean to be rich in space for living and in celebrating the ocean. 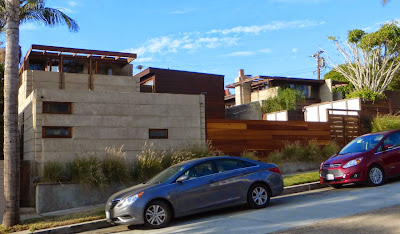 We walked a block down to the ocean, where huge flat, smooth rocks served as the beach. We started looking for ice cream, but found a section of La Jolla Boulevard that Carl said reminded him of Route 22 in New Jersey. I agreed -- wide, car-oriented, slightly downtrodden -- which was surprising, given that the houses just steps away were selling for millions of dollars. Carl and Julia proposed going back to the area around the restaurant where we'd eaten Friday night - George's at the Cove in La Jolla. Mostly Julia followed her instincts about space, with occasional assists from Carl, looking for a restaurant overlooking the ocean. Somehow -- I would say by magic but they would say by architecture -- we got to the Terrace Restaurant at La Valencia, a hotel on Prospect Street, overlooking the ocean. We had sumptuous food while watching the sunset and debating the contributions of various architects to the modern world.
Posted by Mindy Thompson Fullilove at 9:23 AM 1 comment: