Did Bono get Lucille a refrigerator?

This and other questions have been on our minds since my daughters and I saw Fences on Christmas Day.  There is much to think about in this film of August Wilson's play, and much to revel in -- Denzel Washington's acting and directing, Viola Davis' transcendent moment as a betrayed wife, claiming her ground.  As the play has been around for a long time, these questions have surely been hashed out by others.

Here's the exchange that got us wondering:


troy: Yeah, I’ll do that, Bono. Lucille told Rose you bought her a new refrigerator.
bono: Yeah, Rose told Lucille you had finally built your fence.  So I figured we’d call it even.
troy: I knew you would.
bono:Yeah. okay. I’ll be talking to you.

In a subsequent scene, we see, however, that the fence is not finished, and that made us wonder about this exchange.  Was Troy needling Bono?  Was Bono needling Troy?  The distance between the old friends is great, a result of Troy's anger and self-righteousness, which justified his having affair (and eventually a baby with his mistress), being brutal to his son, and brushing off Bono's good counsel.

The self-righteous anger is at the heart of the play, which makes it clear Troy has been caught in the vise of racism, and sees no way out.  He wants his son to eschew hope as well:

troy: I don’t care where he coming from. The white man ain’t gonna let you get nowhere with that football noway. You go on and get your book-learning so you can work yourself up in that A&P or learn how to fix cars or build houses or something, get you a trade. That way you have something can’t nobody take away from you. You go on and learn how to put your hands to some good use. Besides hauling people’s garbage.

In the narrow and bitter space of Troy's life, there is no respite.  But the point of the story is in the ending, when Gabe, Troy's half-mad brother, blows his trumpet and the gates of Heaven open to let Troy in.  Gabe says triumphantly,

That's the way that go!

This is a play that's understood as depicting black life, and of course it is rooted in the particularities of black existence.  My father had Troy's anger and lived some of Troy's life, escaping a brutal father and coming North with the Great Migration, making a way as he made a family and a better America.
But it's the Angel Gabriel, God's Messenger, letting Heaven know Troy is coming, that pulls our coat that August Wilson is not simply transcribing what the guys said at Eddie's Restaurant on Wiley Avenue in the Hill District.  He wants us to know something sublime -- that's why August Wilson is so revered among playwrights and why Denzel Washington's luminous film is so sublime.

The answer to the question -- "Did Bono buy Lucille a refrigerator?" -- is another question, "What do you do when there is no room to move?"

All black people, and lots of white people, know the answer to that question, which is, "God will make a way where there is no way."  August Wilson brilliantly depicts the small openings that give people chances for change and self-expression, some drastic and hurtful, like the affair or Cory's joining the Marines, and some small and ordinary, like Troy finishing the fence.  And even the ultimate one, Troy's brother opening the Gates of Heaven for him, a moment of Grace that gives us all courage to do the next right thing.


Posted by Mindy Thompson Fullilove at 7:31 AM No comments:

Maps of Population Sorting in the US

The New York Times published a series of maps that show where certain television shows are popular. The sharp geographic divisions have been a useful tool to marketers and it seems that political campaigns also understand the useful of this tool.  According the Times' article, the Trump campaign may marketed their anti-Obamacare ads to NCIS watchers and anti-immigration to viewers of the Walking Dead.  But these geographic divisions are built on decades of "sorting" policies that drove people into particular parts of the country.  The co-building of suburbs and highways relocated many white families out of cities, while dividing poor and more affluent blacks into different neighborhoods in cities.  This sorting process tore apart social relationships, shifted political power and created the demographic maps -- and social divisions -- we live with today.  It is a geography of suspicion and intergroup hatred, which spell disaster for collectively managing the massive problems that face us all.
Posted by Mindy Thompson Fullilove at 8:03 AM No comments:

Rachel Diken went to Kitchen Theater, theater in a Maplewood kitchen, designed to address grief and loss and wrote a lovely blog post about it.  In this season, grief and loss are on my mind.  My son, Bobby Fullilove, died in October.  There are so many moments when I feel his loss.  Years ago, my mother made needlepoint stockings for Christmas, and they are a joy of the season.  But what do we do with Bobby's stocking?  Is it like retiring someone's number?  Should it be framed now? 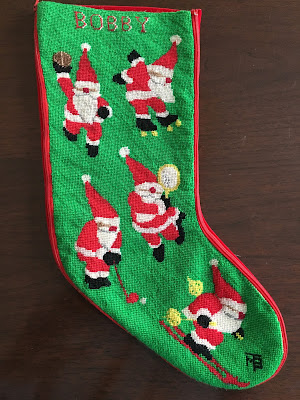 And so I sit in the kitchen of my house with my two daughters, and various little children floating in and out, their joy infectious.  It is not formal theater, just the drama of life, finding ways to encompass loss.  Brian Handy wrote in the NY Times that "Have yourself a Merry Little Christmas" was his song of the year.  He describes the series of versions.  Originally the song, written for the 1944 movie, "Meet Me In St. Louis," said,


Have yourself a merry little Christmas
It may be your last
Next year we may all be living in the past
But Judy Garland pointed out that audiences would hate that -- during the war years, it would have been too terrible.  It was rewritten to the lines we mostly sing:


Have yourself a merry little Christmas
Let your heart be light
Next year all our troubles will be out of sight
We just went through a year of extraordinary hardship -- witness the Year in Photos from the NY Times -- and it is inevitable that more is to come.  Handy notes the song offers the answer, "We will muddle through somehow."  And that is the key to the moment, to our various kinds of griefs and fears for the future.  We gather with our families, adapt our traditions to meet the new situations, cooking, eating, laughing, enjoying babies, muddling along somehow.


Posted by Mindy Thompson Fullilove at 6:52 AM No comments:

December 1st is both World AIDS Day and the anniversary of the day Rosa Parks refused to give up her seat on a Montgomery AL bus.  This year the convergence of these days has special meaning.  In Orange NJ, an additional meaning was added, as gun violence took lives and led to a call for a "peace concert."  What better day to have peace concert than December 1st? And what better place than the Rosa Parks Community School on Main Street?

"Remembering Rosa: A Concert for Peace" was planned by the Music Department of the University of Orange as an assemblage of the diverse musicianship in Orange. The performers ranged in age from young children to seniors.  They had different perspectives on themes, and expressed them in song, stories and performance art.  There were many joyful moments.  For example, the St. Matthew A.M.E. Gospel Choir sang "I need you to survive" which the children of Rosa Parks Community School think of as "their" song.  The children began to sign the words, as the Choir sang.  The joining seemed emblematic of the song's message of interdependence.

It was a night to lift the spirits, one of those Main Street moments to treasure.

Posted by Mindy Thompson Fullilove at 11:01 AM No comments: