Yesterday, which was Monday, December 17th, I started my day in the Bronx at Broadway and 231st Street. The point of being there was to launch an investigation of Broadway in Manhattan. Hirofumi Minami, David Chapin and I have decided to explore this ultimate main street, working in chunks, starting at the northern end. We met at 231st Street, and wandered south on the western side. We made such brilliant observations as that the donut shops were on the west and the car repair and gas stations were on the east. This might have meaning -- you never know. We strolled through Marble Hill, a little bit of Manhattan that is north of Spuyten Duyvil Creek, which joins the Harlem River to the Hudson River. We walked over the Broadway Bridge, one of three bridges over the Spuyten Duyvil. It was a long drop from the bridge to the water, and the water rushes by brown and fast. I crossed quickly, but David, who is quite intrepid, meandered and took pictures all the way across. When we got onto the island of Manhattan, we found ourselves in an arid stretch, populated by the Allen Hospital and then by the back side of a bleacher, apparently belonging to Columbia University, though no sign actually explained this fact. We stopped at Twin Donuts+, where we had Twinskies, much to David's delight. We then walked back to 231st Street, past the River Plaza Shopping Mall and the Marble Hill Houses, a large and well-tended public housing complex. We got our picture taken by a vendor, who was nice enough to pause from selling children's books and capture the beginning of our Broadway journey for posterity. 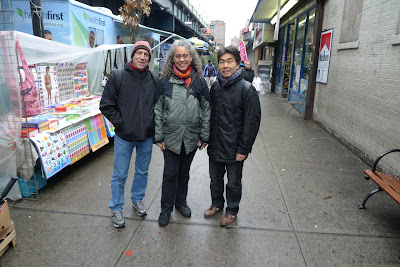 That was a pretty fabulous start to my Broadway day, but there was more. Lourdes Hernandez-Cordero, my friend and co-worker, decided that it would help us to mourn the events in Newtown, CT, if we held a vigil at a public park. I joined her for an hour of reflection and candlelight outside the Ring Garden at Dyckman and Broadway. A group from World Vision joined us. 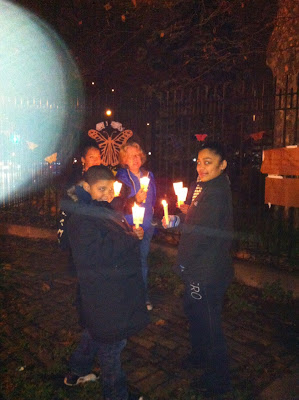 The teens in that group had been part of a youth empowerment training which had lost one its members of street violence. They had organized a response to that tragedy, and it was good to learn what they had done. They discussed how to use their knowledge, and decided to make a better sign than the one we had. They went back today with this sign: 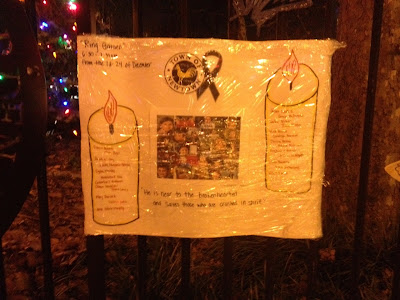 But even last night, we could tell that they had learned some important lessons about managing violence. I think this is what happens with violence -- people who have seen it before are like antibodies, reacting to an antigen -- they know it the next time they see it and they can react quickly to stop it. But back to my Broadway Day. Lourdes and I had a dinner date with our urbanism students, so we headed down to Manolo Restaurant, a tapas restaurant 25 blocks further south on Broadway at 175th Street. While the evening was mostly passed admiring the tapas, we also reflected on the good work the students had done, and the work that they will do after graduation. As the evening drew to a close, I crossed the street to get my car from the garage on Broadway, and drove up Broadway to drop Lourdes off at her house. It was a great day on a great American street.
Posted by Mindy Thompson Fullilove at 4:55 PM No comments: