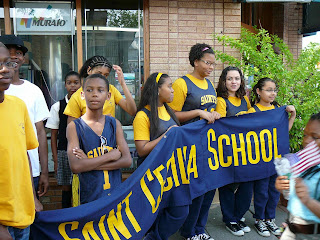 Main Street, as the center of town, is an important site for observing holidays. Memorial Day may be the best of them all. In Englewood, where I live, Palisades Avenue is cleared of parked cars. The War Monument at the west end of the street becomes the center for a ceremony honoring local veterans. The parade participants gather in their assigned spots.
An appropriately patriotic set of words are delivered. The Mayor has created a plaque to honor the Tuskegee Airmen, one whom lived in Englewood. Other elderly veterans are there. The names of those lost are read, and one of the veterans comments that these were his classmates in high school. It helps to remind us how personal this all is. A young man reads "In Flanders Field," and another reads Lincoln's "Gettysburg Address." Through it all, a few listeners are attentive, while the young people gossip. A microscopic sound system is partly to blame: what are they thinking, there city officials? Haven't they been to Central Park for a concert lately? The ceremony closes with a the Englewood Fire Department's bagpipe player doing "Amazing Grace." It is a long set of cliches, but it supposed to be. People in uniform from today's armed forces, and those in the costumes of earlier wars, remind us that this is Memorial Day: the "ultimate" sacrifice is death.
The parade starts, and the sound is suddenly audible. The kids in drum corps know how to make some noise. The karate school wakes everyone up by breaking boards in mid air and performing spectacular tumbles. The Korean drum band is equally determined to get the crowds' attention, in their case attracting attention with sound and the most beautiful costumes. A group of young people in uniform march by. The 10-year-old boy I am standing next to says wistfully, "I'd like to be in the army."
"It's dangerous," I say.
"I'd like to do something for my country," he replies simply. On his return from the Army, he plans to help the President. "I saw President Obama and I'd like to protect him," he informs me. On another note, a steel drum band passes, playing "This land is your land."
Not that long a distance, not that many parts, but what a glimpse of America in this moment.
Posted by Mindy Thompson Fullilove at 2:19 PM 1 comment: