But when I think about it in relation to Hank Aaron, I am forced to think across a longer span of time, about a very long history of death threats, and not only threats, but actual lynchings or even legally sanctioned murder, such as the killings of Native People, or the massacre in Tulsa, among others.

I asked British urbanist, Andy Merrifield, if this were true in his country as well as mine. He wrote back that, no, there were lots of things wrong in England, but not the kind of naked violence that exists in the US -- in that the US is unique.

Somehow, artist Tim O'Brien was able to put it all together for us in one startling image, which Time magazine put on its cover.  I am studying this image as it helps me wrap my mind around the task ahead. 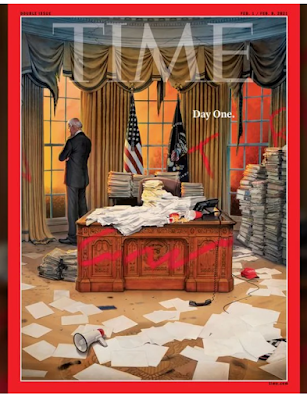 New York Times today had a count of Donald Trump's attacks on Twitter -- depending on how you define "attack," the number was between 6,000 and 10,000, beginning with the announcement of his campaign for President in 2015.

Posted by Mindy Thompson Fullilove at 9:30 AM No comments:

Here's the question hanging over Inauguration Day: What happened?  This is a fill-in the blank question.  What happened over the last four years was _____________.

There are lots of answers bouncing around and you guess is as good as any.

My feeling over the last six months or so was that we were victims of domestic violence, locked in with our abuser who launched violent attacks on our humanity, while denying us succor for our most urgent needs for health care and disaster relief.

The sudden quiet from the silencing of Trump's Twitter account has been a great relief.  Someone was quoted as saying it was a like a car alarm -- you can ignore it for the first hour, but then it gets incredibly irritating.  I have a neighbor whose car alarm goes off from time to time.  It takes a few moments to realize it's stopped, so that the relief settles in slowly but expands to fill my whole body -- I am feeling that now, relieved of Twitter attacks on any and everybody.

I am glad we elected Joe Biden because I don't think he'll attack anybody.  What a relief!

But of course now we are back to the baseline of all the inequalities and abuse embedded in American Jim Crow capitalism.  Not exactly a happy baseline, which is part of the reason some people got so mad they voted for Trump, and some people just didn't vote, and some of us voted but complained bitterly.

As Reverend Dr. William Barber said on election night, "Whoever wins tonight, there will still 140 million poor and low wealth in the United States tomorrow."

I'm ready to keep fighting AND it is really lovely that the car alarm has been shut off.

Posted by Mindy Thompson Fullilove at 10:42 AM No comments:

Rob Wallace on the Metabolic Rift

Rob Wallace is a scientist looking at the links between agribusiness and infectious disease.  Here's an article worth your attention.

Posted by Mindy Thompson Fullilove at 11:52 AM No comments:

Back in the 1990s, while my research team was studying the collapse of the Harlem neighborhood, I developed a "stage-state model of community disintegration." This model was based on our observation that a series of noxious policies of federal, state and city governments had undermined the social cohesion of the neighborhood in a stepwise fashion over a period of 50 years.  This is the diagram of the model and some of the policies we identified as contributing to the neighborhood's changing state. 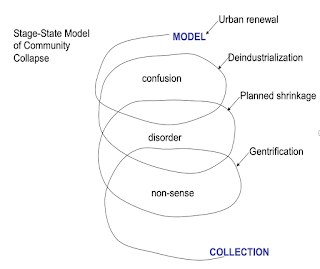 The endpoints -- "model" and "collection" -- are terms created by the great social psychiatrist, Alexander Leighton.  "Model" was the term he used for a community with strong social bonds, able to carry out work like problem solving, and with strong shared sentiments and a sense of "We." "Collection" was the term he used for communities that had lost the interpersonal bonds, lacked widely shared sentiments, and in which the disconnected individuals thought in terms only of "I."
At the time we were making this diagram, we had seen evidence of what we proposed as the lowest level of this model --non-sense -- in the madness that ruled the streets at the height of "mad plagues" of AIDS, crack cocaine addiction, violence, and trauma.  While it was completely clear to us that epidemics in Harlem spread outward geographically and upward in the social hierarchy, at the time I had no clear idea of what that would look like.
Two articles this week in the Washington Post helped me identify non-sense as it now appears on the national stage.  One, of course, had to do with the putsch attempt on the Capitol on January 6th.  While it was going on, staffers were hiding in offices.  The younger staffers remembered lessons from active shooter drills in their schools, and used those techniques to stay hidden while insurrectionists roamed the halls.  The second had to do with the influence that the conspiracy theory QAnon has gained in the Republican Party. That neither grammar school exercises on protecting against mass shootings nor conspiracy theorists taking over government should have anything to do with a sane nation is patently obvious.
But the diagram offers some crucial information on the manner in which we got to this point.  The policies of urban renewal, deindustrialization, planned shrinkage, and gentrification (to name a few) have all been promoted by governments as "progress" for the people, though they were not, and their harmful effects have been left to fester under the proposition "you have to break a few eggs to make an omelet."
The epitome of this, I believe, is in Margaret Thatcher's "No such thing as society speech." She said,

I think we have gone through a period when too many children and people have been given to understand ‘I have a problem, it is the Government’s job to cope with it!’ or ‘I have a problem, I will go and get a grant to cope with it!’ ‘I am homeless, the Government must house me!’ and so they are casting their problems on society and who is society? There is no such thing! There are individual men and women and there are families and no government can do anything except through people and people look to themselves first. (emphasis added)

She was, of course, articulating the ideology of neoliberalism, which sought to eliminate social constraints on making profit and concentrating wealth in the hands of a few.
It's not, I think, that people as smart as she did not know the damage they would do with such rhetoric and such policies.  Rather, I think, it's that they counted on staying, as we used to say, "one step ahead of the debt collector." That we were running the risk of creating non-sense at the level of a whole society was understood by social psychiatrists and many others, but our protests could not overcome the massive lies.  It is clear, in this moment, that Donald Trump lied.  But we have many more lies to excavate than his if we are to right the wrong of the part decades, nay centuries, and get our lives on the right path.
That we are in profound trouble is quite clear.  That we might rebuild is less obvious, but not to be doubted.  Society is so real that it is encoded in our DNA.  We can make a model society that can do the hard work of survival now on the agenda for us.

Posted by Mindy Thompson Fullilove at 10:43 AM 2 comments: