Today I drove the length of Anderson Avenue, which serves as a Main Street for Fairview and Cliffside Park. It is lined by small stores and services. You can find a post office, library, barbecue spot and halal meat market along this street. It obviously serves as a center for organization for those two towns. What is surprising in driving this boulevard is that as one crosses over into Fort Lee, Anderson Avenue becomes a residential street, anchored by Fairway Market at its southern end and Main Street at the northern end. This sudden change in building type requires some explanation -- why should Anderson Avenue be a commercial corridor in Cliffside Park and then not on the other side of the "Welcome to Fort Lee" sign? On an earlier exploration, friends and I had traced Fort Lee's Main Street on its east-west course from the Palisades to Hackensack. Fort Lee grew up along Main Street, which is where its commercial center is located. Its leafy residential sections are away from the hustle and bustle of its center. Anderson Avenue, which is perpendicular to Main Street, heads south, eventually arriving at the Hudson River at Weehawken. The same logic works for Cliffside Park and Fairview that works for Fort Lee -- commerce on the main street and leafy residential streets at the edges -- but the orientation is shifted by 90 degrees. I learned while spending the summer in Paris that pathways often have their logic routed in history. I lived in small apartment on Rue Saint Andre des Arts, a street that has been the site of heavy foot traffic for about 900 years. Originally people were walking from the center of the city to the duty free market outside the city walls. The lively commerce that was started then is still located in the same place and still draws great crowds. Thus history guides our footsteps, whether we're walking the streets of Paris or exploring the major city streets of our hometowns in New Jersey.
Posted by Mindy Thompson Fullilove at 12:41 PM No comments: 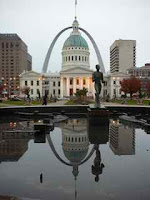 I had the pleasure of visiting St. Louis November 14th.  I wanted to visit the site of the Mill Creek Valley Urban Renewal Project, as well as the site of the Pruitt-Igoe Housing Project.  I was staying at the Hilton at the Ballpark -- a delightful hotel -- and these sites were close by.  I also got to see the Jefferson National Expansion Memorial, which includes the Gateway Arch.  All of these places turn out to flank a downtown mall, which starts at the Old Courthouse, and ends by Union Station.  What splendor!  The arch is a stunning site and the museum well worth a visit.  The Old Courthouse, where the Dred Scott trial took place, is one of the most important places in American history.  Union Station, designed by Theodore C. Link, is a magnificent building, and a major project in adaptive reuse.  And the mall is also an attraction.  Yet, sadly, the magnificence is not well-used.  You would think that such a charming spot would be full of people but everywhere I went, the streets were empty.  There were a scattering of tourists in the park, but that was it.  Jane Jacobs, the great urbanist, made the observation that parks need people.  In general, she was quite skeptical about open space, seeing it as a potential rupture in the tight coherence of occupation that makes a city hum.  She was decidedly opposed to the orthodox view, as propounded by the great park designer, Frederick Law Olmsted, that city people are longing for great open spaces.   Evidence on the Jacobs' side: the most active place I was visited with the tiny stretch of historic waterfront, which is full of restaurants, shops and people strolling about.  St. Louis has much of beauty but to make the city vibrant again, its leaders might rethink all that open space that replaced what once was its energetic urban core.
Posted by Mindy Thompson Fullilove at 9:29 AM No comments: 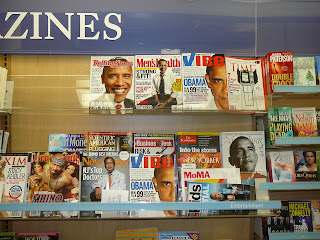 A huge "VOTE" sign strung across Palisades Avenue, in Englewood, NJ, made me think, "What are the indications of the election on Main Street?" For a couple of days I've walked up down photographing what I saw. There was one sign telling the Obama canvassers that the location of their meet-up had been moved. One sign supporting Obama -- not surprising that this was to be found on the street's black barbership. One sign at Ben and Jerry's offering free ice cream to voters -- I was happy to return on Tuesday with my granddaughter, who helped me vote, and therefore had earned my free scoop. I saw one woman, dressed in a McCain/Palin shirt, who was dancing and holding up her McCain sign for passing voters. There was a sign that voting would be help at City Hall. On the whole, Main Street was a little thin of voting action. Granddaughter A'Lelia and I stopped at CVS to pick up some election party supplies and she pointed to the magazine rack. "How many pictures of John McCain do you see?" I looked more closely and realized what she was pointing out. We took this picture. I've heard of people voting with their feet, but this was voting with their magazines, a truly popular vote.

Posted by Mindy Thompson Fullilove at 7:38 AM No comments:

Loving Your Lot in Life

I had the delightful experience of visiting Macedonia AME Church in Flushing, NY, on October 30th. This historic black church was established in 1811 and served the black community that grew up in the area. Robert Moses, the great remaker of New York City, bulldozed the area around the Church to create a parking lot, literally he "bulldozed paradise and put up a parking lot," as it says in the song. This accounts for the odd appearance of the Church, with its main door facing one of the parking lot entrances. Mrs. Beverly Riley, who had read my book, Root Shock, and who was struck by its relevance for her church, related what it's like to surrounded by a parking lot. "We had to push back church services, " she said, "because the parking lot used by people for overnight parking on Saturdays and then our congregation couldn't find parking. People would drive around for half an hour and then go home." She also pointed out that the parking lot itself was set to be transformed, this time into apartments. Oddly, as much as an ugly parking lot is something that annoys people, I know that once it is gone, it will be missed. We seem to grow used to what is, warts and all. As a social psychiatrist, I am always thinking about ways in which people could use what is around them as part of their healing. For some reason, "Garden in Transit," the project that applied flowers to NYC taxicabs came to mind. In that 4-month public art project, children and adults painted flowers on removable plastic that was placed on the hoods of taxicabs to make a movable garden in New York City. The image that came to mind was of the parking lot transformed into a flower garden by having a day of public art and painting flowers over the asphalt. It would help people understand their love/hate relationship with the parking lot, just in time to say goodbye. We don't always have that opportunity. I hated the World Trade Center, but later I regretted that I had never forgiven the Twin Towers for their boring modernism.

Posted by Mindy Thompson Fullilove at 10:49 AM No comments: