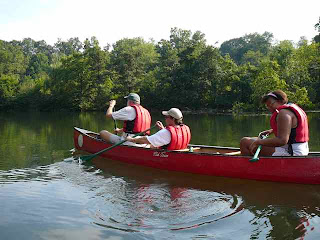 Yesterday I had the remarkable treat of going canoeing on the Bronx River with colleagues from Montefiore Hospital who are celebrating the recovery of the borough. The Bronx was badly damaged in the 1970s by the civic policy of planned shrinkage, which had the horrific unintended consequence of spreading the AIDS epidemic, and unleashing drug epidemics that in turn created overwhelming violence with all its accompanying illnesses. Montefiore has been one of the hospitals at Ground Zero of this succession of catastrophes, leading the treatment and research endeavors for all these problems. Like other organizations it has soldiered along doing what it could for recovery. The Bronx River Alliance is another example of an organization committed to the recovery of the Bronx, and doing the slow, considered work that I've come to call "careful recovery." Since the 1970s the Alliance has been cleaning the river and bringing people to the river so that it might function as a "Main Street" of recreation and community life. They have removed 70 cars and 12,000 tires, and fought for better caretaking by upstream communities which still dump on the river. They hope to make the river swimmable, and they are nearing that goal -- what a wonderful gift that will be to the Bronx! What makes this "careful recovery" are the following characteristics: they haven't gone for a quick fix, indeed, they know there isn't one; they are aware of and seek to understand all the complexities of life along the river, its ecosystem; they teach others to love the river as they do; and they reach out to all the communities that might help. Careful recovery helps all the injured parts of the ecosystem -- animal, vegetable and mineral.
The river I visited yesterday was sparkling in the sun, and its clear bottom was free of debris. People were gathered at its edges, longing to get in, which some had done though the probably to their peril -- it's not that clean just yet. The river plays peek-a-boo with the city. At one point we got stuck on a sand bar just under a bridge. A man on the bridge helped us get our canoe going the right way, just as he would have helped us get our car off a patch of ice. Another time we heard a man singing, though we couldn't see him. My granddaughter Lily shouted, "You sound great!" "I think it's important to compliment people," she said to Greg and me, her fellow paddlers. What was the man thinking to hear a voice come out of nowhere? There are so few paddlers on the river, he might not have thought to look for the voice there.
When we arrived at the Bronx Zoo, we entered a small lake created by dams built hundreds of years ago to power small factories. There insects hovered over the water and water birds collected, including an egret, a duck, and a seagull. Dart Westphal, who had organized our trip, said that a beaver had been spotted on the river, the first since the dams were built in the 1700s. When he heard about the beaver he went out and bought a beaver tie and gave beaver toys to all his friends: that is how careful recovery works, I thought to myself, celebrating small victories on the road to Recreation Main Street.
Posted by Mindy Thompson Fullilove at 5:27 AM 1 comment:

The services of Main Street

Cities are complex systems, and each arises as part of a larger system of cities. Cities are internally organized and connected to and concerned with the rural areas that give them sustenance. They are decorated with monumental buildings that embody the ideals and structure of the local culture. They are centers of human living, energized with exchange. The Main Streets of our era play a crucial role in organizing cities along all of these dimensions. A way to begin to look at Main Streets is to consider the way in which the street serves these many functions. Is it connecting the parts of the city? Does it connect to other cities and to the countryside? Does it display the city's monuments? Does it help to energize interpersonal exchange? Is it serving the whole population of the city, or only part? Does it carry out its duties with panache? These questions, drawn from research on the history of cities, offer us an excellent metric for thinking about the cities to be visited in this project.
Posted by Mindy Thompson Fullilove at 10:45 AM No comments:

In the spectacular film about the diaspora after Hurricane Katrina "Axe in the Attic" there is a woman who was displaced to Florida. She remembered that everyone there went to the mall on the weekends. "I said, 'Don't you people have a fest? Don't you have a jazz fest, a river fest, any kind of fest?'"
What is a city without a fest? I think festivals are a modern version of the market fair, which would create centers of exchange, energy and imagination in times when cities were smaller and travel much harder. A few years ago I spent a delightful few days in a city near Avignon which was the site of one of the largest medieval markets in Europe, and I was very interested to learn how such markets worked. I think that today's festivals follow in the footsteps of those long ago events. A city without a fest is a city without a way of quickening its heartbeat and stimulating its methods of exchange.
So far this summer, I've been to Moosefest in Bennington, Vermont, with my medical school classmate, Dr. Martha Stittelman, and Spiedie Fest and Balloon Rally in Binghamton, NY with my college classmate, Dr. Francine Rainone. Moosefest is an art installation on and around Main Street in Bennington. The moose are large and fabulous, big enough to stop traffic and interesting enough to provoke conversation. Martha asked the useful question, "How does art stimulate the urban economy?" Happily for me, we could see it at work as we walked around: people were walking on Main Street to see the moose (plural: moose), and that meant that all kinds of other things were happening, beginning with two young girls who were playing violin to raise money for the local animal shelter. People gathered around to hear them play, smiled at each other, gave money, left feeling better about the world and their place in it and voila! we have a better economy because of art. Martha, who rarely goes to Main Street, was proud to show it to me, and I enjoyed seeing it. My favorite moose: Camping Moose.
Binghamton's Spiedie Fest and Balloon Rally was celebrating its 25th year. "Spiedie" are Italian skewered meat, a version of shish kebab, started no one knows when or how. This is only in Binghamton, so it is very local treat. Spiedie Fest is a community festival held in a local park, which becomes Main Street for the weekend. As such, it sets a fine example of what all Main Streets should be: it has rides, crafts, a vintage car show, music, and, of course, spiedies. I loved SpiedieFest because it was simple and real -- the crafts were actual things people had made, not tube socks. A special highlight was that the New York State Comptroller's Office had a tent there and Francine and I both found that we were owed money! Free money, good crafts, tasty food! If every Main Street had those things, people would be pouring in the way they were pouring in to Spiedie Fest! Food for thought...
Posted by Mindy Thompson Fullilove at 7:59 PM 1 comment: