In a terrific opinion piece, George Ferguson argues that High Streets/Main Streets are not just about commerce -- they will prosper if they also serve a social purpose.  In Bristol,  where he is Mayor, they have instituted a program called, "Bristol Make Sunday Special" which closes off the street cars, and welcomes all kinds of musicians, water slides and magic.  People have embraced the program -- no surprise.  Actually, I've come to believe that the reason people go to High Street/Main Street is not to shop but to sightsee.  They are there to see and be seen.  And what better time to do that than when thousands of others are doing the same?  They will also shop, because people like to do that too.  It's a two-fer, a point that Ferguson makes -- economic recovery needs social recovery.  I saw him speak once, and all of the ideas he put forward were exciting and sound.

In the opinion piece, Ferguson wrote,

There are untold benefits to unlocking the potential of public spaces and putting high streets back at the heart of the community. A strong shared identity, greater civic pride and a sense that our retail centres can be much more than just temples of commerce, providing a sense of place and community is the reward for an imaginative approach that will lead to a real social recovery. 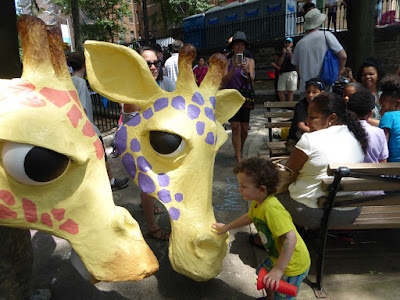 Today, the NYC Parks Department put on a festival to celebrate the reopening of the High Bridge.  Thousands of people turned out to walk the bridge and see the sights.  While there were small tables of organizations that have been part of the reopening, it was not a commercial event or a "health fair" or anything other than making a Main Street that ran from Amsterdam Avenue across the Harlem River to Sedgwick Avenue in the Bronx.  It is Pop-UP Main Street, as all good festivals are.  Our CLIMB contingent sashayed across the bridge with two enormous giraffe heads made by Tony Gonzalez and the artists of Creative Art Works.  The little children were struck with wonder, and the adults grinned -- they couldn't help themselves.   It was exactly what Mayor Ferguson was describing, only on a Pop-UP, not a quotidian Main Street.  It works.  We should try it.
Posted by Mindy Thompson Fullilove at 4:21 PM No comments: