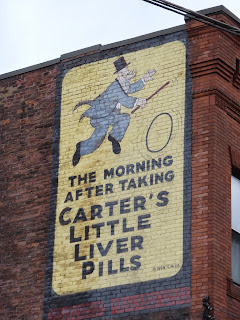 I am gearing up to write about all these Main Streets I've visited. Jake Izenberg and I are finishing up a paper about the model we've developed. I've launched a project to make a design sketchbook of the key ideas. And I've updated the list of cities I've visited -- there are 105 that have informed my thinking up to this point. I hope to visit Japan, Austria and South Africa in the course of this year and that will add immeasurably to what I know. Part of this assemblage has been to do with reviewing the thousands of photos I've taken and pulling out those that mean the most to me. Given this selection criterion, it is possibly just my taste in Main Street stuff, but I was thinking this morning that Main Streets are a lot like an attic, filled with stuff we might not use but don't want to throw away. I usually think of an attic as some place out of sight, out of mind. Once I put some boxes in an attic in Berkeley, then inadvertently forgot them when insulation was blown in. They are possibly still there. Main Street is not out of mind, except in that way that we stop seeing places to which we're accustomed. We don't necessarily think about the old stuff, unless somebody messes with it. It is horrible when they do. A building owner got the idea that the gargoyles on her building were bringing her bad luck so she chopped them off. I was stunned and horrified -- but ask me the last time I'd thought about the gargoyles or even if I ever thought about it. (I don't think I ever did.) Going to Main Street and seeing the ghost signs, and fading window decorations, the old stone work -- these things anchor us in space and time. I met a woman the other day whose family had owned Moskin's Pharmacy -- they have a wonderful sign that I love to see each time I'm on Palisades Avenue in Englewood. It's not just the familiarity of that sign, but that the style of the sign reminds me of all the signs on all the buildings when I was growing up. It is a part of the signage of my life. There are lions of all sizes on Main Streets all over the world. And not only lions but other cats as well. Why so many? I have no idea. But lions and Main Street go together. I mean, you don't see pandas or rhinoceri on Main Streets, do you? Sonia Sanchez has a book of poetry that has the title, "My house has lions, does yours?" I love that title and eponymous poem. My babysitter had two lions flanking her stairs and I take such comfort from seeing lions. So lions are stored all over Main Streets. When we touch something on Main Street -- whether we like it or we don't -- we ought to have in mind that this is a FAMILY attic -- and the thing we might want to throw out is dear to someone else -- good to check, and not to just chuck it as useless clutter.
Posted by Mindy Thompson Fullilove at 10:30 AM No comments:

Architect Walter Street III passed along an article in Smithsonian Magazine about Vanport, Oregon's city largest city, built 1943 and was washed away in one day 1948. It is a stunning story of racial discrimination in housing, and the author draws the lines from then to the present-day lack of diversity in Portland and Oregon. A stunning story.
Posted by Mindy Thompson Fullilove at 10:26 AM No comments:

Locking others out, locking ourselves in

In a brilliant article on "hostile architecture," Alex Andreou makes the point the spikes that keep a homeless person from sitting on a low wall also keep a pregnant woman or an elderly person from doing the same thing. People know when they've been excluded. People know when they're doing the excluding. None of this makes the kind of society we need for longterm survival of our species.
Posted by Mindy Thompson Fullilove at 7:09 AM No comments:

Unusual leaders come forward to help us in tough times 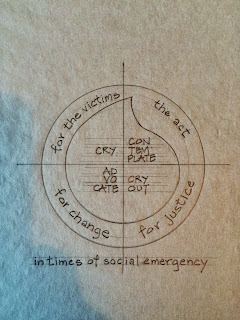 It is not every day that the head of the FBI and the head of the NYC Department of Health come forward with similar appeals, but that's what we've seen in the past few days. James B. Comey, director of the FBI, made an unusually direct address on the subject of policing and race. According to the NY Times report, "Mr. Comey said that his speech, which was well received by law enforcement officials, was motivated by his belief that the country had not 'had a healthy dialogue' since the protests began in Ferguson and that he did not 'want to see those important issues drift away.'" Mary Bassett, MD, writing in the New England Journal of Medicine, said, "As New York City's health commissioner, I feel a strong moral and professional obligation to encourage critical dialogue and action on issues of racism and health." Her comments were also triggered by the events in Ferguson and Staten Island, and the ongoing protests those events had triggered. I am greatly encouraged by this powerful leadership urging us to keep talking. Charles Blow, NY Times columnist, brought some humor to this issue, urging us to recognize that, while we might not be involved in the perfect Truth and Reconciliation Meeting, we are having a "kaffeeklastch on race" that is moving us forward. In a social emergency, it is essential that leaders show the way. In response to a plea by the Design Studio for Social Intervention, architect Randy Collins sketched what we need to do: Cry for the victims, Contemplate the act, Cry out for Justice, Advocate for Change. I think we are moving on that path now.
Posted by Mindy Thompson Fullilove at 6:56 PM No comments:

According to William Morrish, architect and professor in Urban Ecologies at Parsons The New School for Design, "MainStreeters want their ideas to become mainstreamed and accessible to the widest audience." Of course. That's why you need to be on Main Street, where everybody passes by. Check out the crowds on Fayette Street in Raleigh NC at the Moral Monday protest in this superb article by David Swerdlick in The Root.
Posted by Mindy Thompson Fullilove at 7:37 AM No comments:

Redlining is an honored practice in the US. The University of Orange, as part of the 2015 Jan term, led a trip to the National Archives in College Park to collect maps and survey forms as part of a national project to get all the redlining maps online. This will enable all of us to understand what happened in 1937, when the federal government sent surveyors out to 200 American cities, looking for "undesirable racial elements" so that banks could be warned about neighborhoods deemed unworthy of their money. This damnable process has long since been outlawed as such, but racism is a clever germ, and constantly mutates. One scientist compared it to HIV, which is the fastest mutating organism we know. What's the latest mutation? Instead of warning about "undesirable racial elements," Movoto Insider warns against crime, with an article, "These are the 10 most dangerous places in New Jersey." Hint: you don't want to buy a house there and if you live there, LEAVE. We, at Movoto, can help you get a home in one of those safe cities for which New Jersey is famed. Of the top 20 cities for Black population in NJ, 10 are listed in Movoto's top 50 for crime. This is another way of redlining, calling out these cities for their troubles, unbalanced by their history, strengths or hopes. This is the old wine of redlining in a new bottle of "danger."
Posted by Mindy Thompson Fullilove at 5:25 AM No comments:

What the "Main Street Kiss" teaches us about Ebola

In 2009 Matthew Aune and Derek Jones were strolling through Main Street Plaza. Aune gave Jones a kiss on the cheek and they were immediately stopped by security guards, thrown to the ground, handcuffed and arrested. While "Main Street" seems like a fine place to show a little affection, one block of Main Street in Salt Lake City was "bought" by the Church of Jesus Christ of Latter-Day Saints and is private property. No kissing, short shorts, sunbathing -- only strictly modest behavior allowed. Aune and Jones protested and LGBTQ community of Salt Lake City supported them by holding a "kiss-in." This opened the door to private talks between leaders of the LDS Church and the LBGTQ community. The talks gradually led to increased understanding and paved the way for a historic breakthrough and protections for gay rights in Salt Lake City. What is so interesting about this story is that it illustrates the kind of magical transformations that can occur in cities -- and which I think of as "urban alchemy." It helps us understand the remarkable report in today's NY Times that people in Liberia, Sierra Leone and Guinea found ways to manage the Ebola crisis. The Ebola epidemic has been worse than it needed to be, but much smaller than at one point we thought it might be. It was worse because of international disarray. But it is smaller that it might have been because people, faced with an impossible situation, took matters into their own hands and developed strategies for epidemic management. The Times article points out that people changed their behavior and this was particularly powerful in the urban settings. One story seemed to capture of lot of what on the ground. A neighborhood health group took charge of protecting people from Ebola. "In September, as the epidemic widened, the group’s chairman, Jeremiah Fahnbulleh, 27, another technical college graduate, proposed two measures that many communities would adopt in one form or another: outsiders would not be allowed to spend the night in Parker Paint; and residents leaving Parker Paint for more than two consecutive nights would be placed under quarantine upon their return. Standing under a mango tree next to his family home, a transistor radio at his side, Mr. Fahnbulleh said he came up with the idea after listening to the radio during a sleepless night. 'The thought came to me that Ebola came from one place to another, from house to house, from community to community,” he said. “Listening to the radio, I got to know how people got infected.'" People in cities, confronted with serious problems, get ideas for how to solve them. This can lead to changes that defy our predictions and that promote the general well-being beyond our wildest dreams. This is a profound lesson about the ways in which change can happen at blinding speed and with extraordinary power.
Posted by Mindy Thompson Fullilove at 6:25 AM No comments: