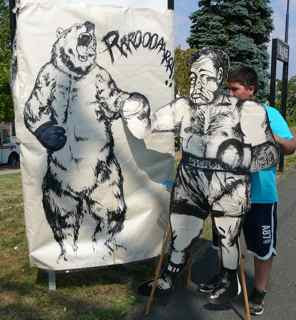 Tony Galento, the heavyweight boxer, was a son of Orange. He once knocked Joe Louis to the mat, a moment that was cheered in some parts of town, while Louis' eventual victory was celebrated in another. That's how American cities work. Galento was honored by having a plaza named after him. This plaza is largely a parking lot. In his honor, an "Envision Tony Galento Plaza" Day was held last week. Artists made drawings of Tony and a bear that he once took on. Everyone came by and boxed with Tony or the bear, or Tony and the bear. People told stories of the kind of guy he was. He once ate 50 hot dogs before a boxing match, someone said. Another told me about the bar he had in town, with a boxing club next door. The more stories I heard, I more I looked around at the expanse of parking lot, with its broken asphalt and forlorn shrubs: no people, no action, nothing happening. Then I looked at the all the people clowning around with the drawings of Tony and the bear (in the photo, Gabe is moving Tony's arm to knock out that bear!). Yesterday I was reading an article about a neighborhood in Portland, Oregon, that painted a sunflower in an intersection to create a piazza. Then I had a vision: we could paint a boxing ring in Tony Galento Plaza and make ourselves a piazza.

Can you see it?
Posted by Mindy Thompson Fullilove at 6:28 PM 2 comments:

Rock, Paper, Scissors is not a sport I ever imagined myself playing, so imagine my surprise when I found I was in the third round of play for the New Jersey championship and a chance to represent my state at the World RPS Championship in Toronto! No. 10, an intense young woman with a faraway gaze, defeated me, but many people at Hat City Kitchen came up to complement me on my play. It was a heady feeling. What if I had gone all the way? Imagine the new respect I would have earned in my home town.

291 Years of Ministry Come to an End

The First Presbyterian Church of Orange, a congregation that was organized in 1719, held its final service yesterday. The congregation has been a force in Orange for 250 years. The names on the walls of the church are the same as those on the streets of the city. The tombstones dating back to the colonial era remind us the settlement of the area by Europeans who first arrived in the 1600's. The Presbytery of Newark has put the building on the market. Yesterday's ceremonies closed with an organ concert performed by Anthony Mark Lamort on the church's magnificent organ, with its hundreds of pipes. He closed with an improvisation on the song "Jerusalem." William Blake's plaintive question, "Was Jerusalem builded here, among these dark satantic mills?" might will have been about the church, a glowing sanctuary a edge of an industrial district that produced 4.2 million hats in its heyday.

The Church is an anchor of Orange's Main Street, and keeping the building a strong site is a now a key goal for city leaders.
Posted by Mindy Thompson Fullilove at 4:30 AM No comments:

Brunch on a rooftop

This is a sleepy Saturday in Jersey City. My daughter Molly and I met up for brunch on Grove Street, but a fixture on an electric pole exploded. It seemed a good idea to mosey over to another place. A rooftop garden beckoned, so we headed to Skinner's Loft. Their rooftop was beautiful and practical -- their basil was gorgeous. We relaxed in the sun, looking out over Newark Avenue, the closest Main Street to Ellis Island. Jersey City has always been a city of migrants and immigrants. Today, the migrants are people from the suburbs of the state as well as from Puerto Rico, and immigrants have arrived from the four corners of the globe. The long and fascinating avenue pulses with change and evolution. Brunch on Newark Avenue gave the sleepy Saturday a connection to the melting pot of America.
Posted by Mindy Thompson Fullilove at 11:10 AM No comments:

The foundation for recovery

On the Main Streets I visit, a growing number of "for rent" signs signal the difficulties faced by enterprises of all kinds. A growing, and perhaps ill-informed, consensus that this is time for fiscal austerity means that even harder times are coming. The government jobs that the bedrock of our cities will be cut to the bone in months to come. Both federal and state governments are pulling the resources out. The cities are left with little choice but to retrench. The hesitant and partial recovery of recent years will be threatened.

This creates difficulties for the present, but also for the future. The creative ideas of local entrepreneurs are an important engine of growth. And cities have an important role to play in this process by creating the connections that foster new thinking. Thus, undermining the cities of today undermines the foundation of the future. This can be discouraging, and people can turn against one another, fomenting violence and dissent. In Orange, citizens are making an active effort to connect through two upcoming events. The first is a festival at the train station, known as Tony Galento Plaza after Orange's favorite son, and the second is a rock, paper, scissors tournament at Hat City Kitchen, a new restaurant in the Valley.

Michel Cantal-Dupart, in his book, Merci La Ville, observed that the people who want to make strong cities would do well to be attention to the festival. In that regard, let us hope that the developers, politicians, entrepreneurs and others interested in the future of Orange pay a lot of attention to these two delightful occasions.
Posted by Mindy Thompson Fullilove at 3:55 PM No comments: On June 19th, the University of Orange celebrated in its second annual graduation. Requirements for graduation are: voting, having fun with neighbors, going to a city meeting, taking two uofo courses, and volunteering. I was proud to have completed this list of tasks of good citizenship. We held the graduation at the First Presbyterian Church of Orange. It was a bittersweet moment, as the congregation, established in 1711, has recently dissolved, leaving the fate of its beautiful home up in the air. We all thrilled to the bells playing the recessional as we stood for this picture. Our hopes are for a future for this lovely place that befits the dreams of its colonial-era founders.
Posted by Mindy Thompson Fullilove at 8:01 AM No comments: 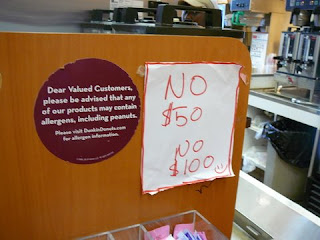 I got through the heat wave that wilted NJ the past few weeks by drinking iced coffee. One day I went to the Dunkin' Donuts on Main Street in Orange and I saw a sign that said no $50s, no $100s. A few days later I was on the main drag in Upper Montclair, which by contrast to Orange is dripping with wealth. I went into Dunkin' Donuts to get some iced coffee. The lady after me was digging in her change purse. "I have to give you change," she said to the young clerk who stood waiting patiently. "All I have is a $100."

The young girl shrugged, "Of course they can change $100 in Upper Montclair!"
Posted by Mindy Thompson Fullilove at 7:55 AM No comments: