Tuesday, September 22, 2020, was the fall equinox. On that day, headlines announced that 200,000 people had died from Covid-19 in the US. This occurred on the heels of the September 18th death of jurist Ruth Bader Ginsburg, which was a loss of a great woman but also the precipitant for national crisis about the vacant Supreme Court seat. No question but President Donald Trump would rush through a conservative judge to create a long-lasting conservative majority on the court. Loss and dread left me, for one, very depressed. It did not feel like equal amounts of light and dark.

In the week since the equinox, I've struggle out of that emotional hole. It was a miraculous community event that brought the sun. The HUUB, at First UU in Orange, hosted an event to promote the census. Young dancers from Concepts in Choreography, who sometimes practice in our parking lot, came by and started to dance to Jersey club. At about the same time, the Guatemalan community next door started its folkloric festival with dancers in fabulous costumes. There was a fence in between the two -- Charlie Wirene, managing director of the HUUB, made me day when he said, "We just have to take out a fence pole and open it up."

Since then, openings have piled up. Something about this hour which is calling community together. A moving piece in the New York Times made that point about a community in Oregon devastated by Covid-19 and then by wildfire. Despite the terrible losses, the community was pulling together. Restaurants, for example, were planning how to provide meals for months for those in need.  As one teenager said,

“You just really see your community light up for you,” said Estefania Ortiz, 17, a high school senior who is Ms. Alexia’s cousin. “I keep telling my teachers — it’s a small community with a big heart.”

The equinox showed me the troubles of the world.  But there is more: there are fenceposts we might remove so that we can pull together to get through this.

Posted by Mindy Thompson Fullilove at 2:27 PM No comments:

Ancestry.com wrote to say that they had updated the results of my DNA tests and they had new information to share with me.  I went to the website and was shocked to see that I was no longer part Irish, but rather 26% Scottish.  I have been part Irish all my life, as well as part Native American.  The first go-round Ancestry said that, no, I had no Native American DNA per their results.  Shocking.  But this time I'm no longer Irish -- I'm Scottish?????!!!!.  As my daughter Molly and niece Jaden had also learned about being part Scottish, we spent some time exploring our heritage, at least the obvious parts: Mel Gibson as William Wallace, Sean Connery as Sean Connery, Sam Heughan as Jamie Fraser and nameless attractive people in handsome plaids.  More will be revealed.  Time to work on my shortbread.

Posted by Mindy Thompson Fullilove at 4:47 PM No comments:

I was on a panel today with architect/planner Mark Barksdale, who opened his remarks by recounting his experience of looking at the hole in the side of the Tower, knowing from his training that the building would collapse, and being helpless to stop it. He felt sick when he heard that people had been told to shelter in place rather than flee. His vivid image of the wounded Tower made me think of the many wounds to the social fabric of our nation. I often wonder these days if our society will collapse, and so do many other people.

I was heartened by listening to Reverend William Barber II. Toby Horn, a college classmate, sent me a link to a Facebook Live event, Rev. Barber II chatting by phone with Andy Shallal of Washington, DC's Busboys and Poets Bookstore. Rev. Barber said to Andy, "We must vote this November. We must have people in office who will fight for the poor, the low-wealth and all who are oppressed and marginalized. And after we vote, we will insist that they do the right thing. Forward together, not one step back." This possibility filled me with joy.

And I also took heart from the University of Orange weekly newsletter, which told the story of NYC RECOVERS, a project my colleagues and I started after 9.11. Reading about the project reminded me of all we learned in tending to the social and emotional recovery of New York City, and most particularly the tasks of groups, which we named: Remember, Respect, Learn and Connect.

Life is, after all, a conversation with the world in which we try to name the problems, try to remember when we've faced them before and then try to remember what worked. We can get lost in this process, and that's what friends are for. One of my friends, Doug Farrand, has spent the past five months reminding me that, back in March, I said we needed to turn on the love to get through this moment. His repetition of my advice is slowly sinking in.  This photo of a rock in Highbridge Park, which was the last slide I showed on the panel, captures this sentiment. Remember, Respect, Learn and Connect -- and TURN ON THE LOVE. 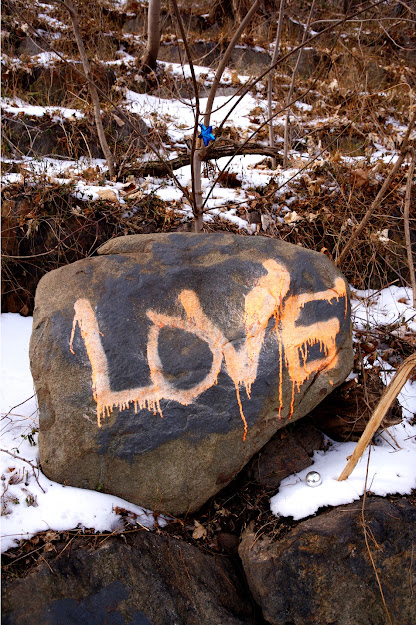 Posted by Mindy Thompson Fullilove at 5:44 PM No comments:

What I have to say about Main Streets

Yesterday I got to celebrate the publication of my new book, Main Street: How a City's Heart Connects Us All.  It was a great party, aptly outlined by architect/artist Carol Hsuing, who designed the book's cover. 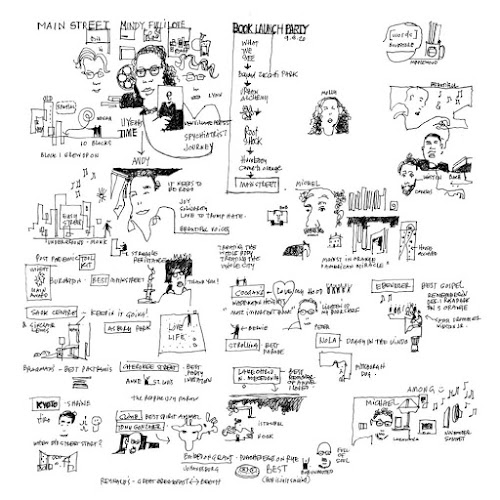 I loved that Andy Merrifield, who wrote the foreword, called in from Cambridge, England, Michel Cantal-Dupart, to whom the book is dedicated, called in from Paris, and Hirofumi Minami, who invented the stroll-and-scroll method I used, got up early in the morning to call in from Japan.

So many great friends and colleagues showed up -- as I noticed 121 people were in the Zoom at one point, I can't even begin to name them all!

And we had extraordinary moments, like listening to Winston Nelson play a Bach arrangement he had made. Michael Lally read two of his poems he allowed me to reprint in the book, as well as tinkling the ivories to Thelonius Monk's "Easy Street," which Andy said was the book's anthem.

A special part of the evening was giving "Might and Main" Awards to people who have contributed so much to making and maintaining America's Main Streets. It was a real pleasure that Mayor Barry W. Conaway joined us to receive the award for "Best Main Street" on behalf of his city. Tony Gonzalez received the "Best Spirit Animal" award on behalf of himself and the CLIMB team.  Winston Nelson accepted the award to the Ebenezer Gospel Choir for "Best Gospel Choir in the Circle." Peter Walsh accepted the "Love my 'Hood" award on behalf of Coogan's Restaurant, and pledged to fight for Main Streets and small businesses everywhere. While Robert Sember was not accepting the award to Johannesburg's Baked on Grant for "Best Poached Eggs on Rye Toast," he agreed that they were amazing.

The evening represented what I have to say about Main Streets: they are made by our collective labor, the whole tangle of Main Streets is greater than the sum of its parts, and we need them now more than ever for their powerful centripetal force, pulling us together to solve our problems.

Posted by Mindy Thompson Fullilove at 12:40 PM No comments: