Time for a New Prescription

Dr. John Sarno died on June 22, 2017, at the age of 93.  He was a physician who observed that much pain was psychosomatic in origin.  As American medicine has largely rejected the idea that feelings can cause sensations in the body, he was ostracized by the profession.  Happily, his books – including Healing Back Pain: The Mind-Body Connection – reached millions of people in many countries and helped them heal themselves.

“All the Rage,” a documentary about his work collectively directed by Michael Galinsky, Suky Hawley, and David Beilinson, has just been released by RUMUR.  It arrives at a moment when the medically preferred method of pain treatment has triggered an epidemic of opioid addiction that is estimated to have taken 59,000 lives in 2016 alone.

It is time for humility.

As physicians, we swore the Hippocratic Oath, to “first do no harm.” It seems to me a reasonable corollary when we have done harm is “to admit harm and change course.”

But, some will say, Dr. Sarno’s ideas are not supported by data.  That is a red herring.  The data about opioids have not been as thorough as one might presume, especially given the frequency with which they’ve been prescribed.  Indeed, one widely cited study of the safety of opioids for pain turns out to be a letter to the editor published in a medical journal, not the hallowed randomized controlled clinical trial one would have expected.  At this point, new findings are emerging every week, shedding light on the ways in which opioids work to produce dependence and addiction. The evolving story suggests we must use these drugs with great caution.

By contrast, there is more than enough data about the reality of the mind-body connection and the effectiveness and safety of the mind-body interventions for us to move forward with confidence.  However, as is often the case, sound “data” are ignored.  This has been true for a long time: scientific breakthroughs are resisted for reasons that have nothing to do with the soundness of the intervention.  The British Navy, for example, ignored for 50 years the advice that limes could prevent scurvy among seamen.  Many suffered unnecessary death and disability during that period.

The opioid epidemic offers a remarkable opportunity to go in a new direction in the treatment of pain and in the embrace of the mind-body connection.  State legislatures are busy restricting opioid prescribing.  Change must happen, but what?  What a perfect moment to go see “All the Rage,” pick up one of Dr. Sarno’s books, and try a new prescription! 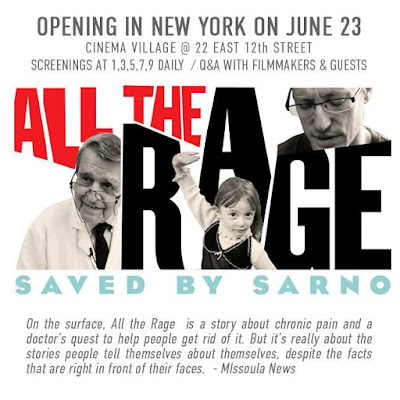 Posted by Mindy Thompson Fullilove at 6:09 AM No comments:

The Assassination of Beale Street

I started studying urban renewal in 1994, when I first met David Jenkins, who'd been displaced from the Eastwick neighborhood of Philadelphia when he was eleven.  In 1995, I went to Roanoke, VA, for the first time, visiting with Mary Bishop, journalist extraordinaire, who had written the classic article, "Block by Block, Street by Street," about urban renewal in her city.  I got to talk to many of the people she'd interviewed. Those first exposures to the story of urban renewal were followed by many others.  I pulled my analysis together in my 2004 book, Root Shock: How Tearing Up City Neighborhoods Hurts America and What We Can Do About It.  In the years since, I've heard many more urban renewal stories, and their similarity has struck me.  You might say, that I got used to the stories and they didn't strike the same chord of horror that the first ones had. Indeed, I thought I'd heard it all.

But then I encountered the story of Beale Street in Eugene J. Johnson and Robert D. Russell, Jr.'s book, Memphis: An Architectural History.  They open their discussion of the story by saying, "Beale Street today [they were writing in 1988] is one of the saddest examples of what urban renewal did to cities. It stands isolated in a green desert of grass that grows where once a thriving, or least throbbing, black community lived and gave sustenance to one of the greatest centers of black culture in the United States."

I am going to give an extensive quote from Johnson and Russell, because the book is currently out-of-print, and it might be difficult for people to read it in the original.  That said, I hope the University of Tennessee Press reissues this marvelous work!


By 1964 the Memphis Housing Authority (MHA) had prepared a masterplan for whole Beale Street area, which it announced in an eight-hundred page report that suggested that Beale had to be destroyed to be saved.  No one, of course, read the whole report.  It was accompanied by a curious public relations brochure, short and east to read, that illustrated all of the street's great monuments that were not black.  Left out were pictures of the famous saloons, which the tet did mention, and of the pawnshops that clogged the block between Main and Second, which the report did not mention.  The brochure contained the ominous statement: 'Beale Street has been permitted to deteriorate to a point where little remains, from a practical standpoint, of its lively past.'

Consultants for the plan were Walter A.J. Ewald and Associates, who had submitted their report in 1963.  They envisioned a Beale Street surrounded by new shopping malls.  That is, they had decided, at the very beginning of the project, to tear down the surrounding community of houses and small businesses and replace them with a cordon sanitaire of shops, arranged like those in a suburban mall.

The project, of course, was sheer pie in the sky.  There was no money to fund it, and there were no businesses lining up to open shops in those devoutly-dreamed surrounding malls.  In 1964 the city told MHA to go ahead with an application for a federal grant, and in winter 1968 the project was still under not-very-urgent discussion.  In April 1968, however, Martin Luther King, Jr., was murdered at the Lorraine Motel, just a few blocks from Beale.  That assassination lead to the assassination of Beale Street.  In November 1969, with almost miraculous alacrity, HUD set aside $11,000,000 to fund the Beale Street Urban Renewal Program, and in June 1970, a HUD undersecretary flew into town to announce another grant of $14,000,000 for renovation.  The bulldozers were already at work.  By the time they got through, all but about 65 of the 625 buildings that had stood on the 113 acres of the renewal area were gone.  If decimation takes one in ten, what should we call an act that leaves one in ten?  Fifteen hundred residents were displaced to other parts of the city.  (emphasis added)

Johnson and Russell go on to describe the destruction of the block between Second and Main, once occupied by pawnshops, forever insulating Main from Beale.  That was followed by a long period of languishing, during which most of the remaining buildings fell apart.

This story is astounding on many levels, among them these:


This is a story that should be told in the National Civil Rights Museum, now installed in the Lorraine Motel, right there in the Beale Street Neighborhood.  Linking the destruction of black neighborhoods to Civil Rights will help everyone understand the new phase of the struggle that started in 1949, with the passing of the Federal Housing Act, and continues to this day in Memphis and elsewhere.  The Beale Street neighborhood is slowly being converted into the kind of "approved uses" the planners dreamed of in 1963.  It has no room for the former poor and black residents.


Posted by Mindy Thompson Fullilove at 2:18 PM No comments: