Main Street, the East End and the Wooly Adelgid 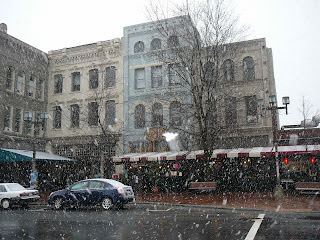 In February I visited Asheville, North Carolina. The week before I'd been in Raleigh and spring was swelling in the bushes. I was sure that I'd have the joys of early spring during my trip. I was there as part of a celebration of Asheville history as captured in the photographs of Andrea Clark, which were on exhibit at the public library. I was enthralled by her remarkable photos of a lost place, destroyed for road widening. While there, the newspapers reported on two topics that also caught my eye: the plans for Downtown Asheville and the wooly adelgid, which is attacking the hemlock forests which dominate the mountainsides. Thinking about Clark's photographs, downtown planning and ecological disaster helped me to grasp a point that my urbanism teacher, Michel Cantal-Dupart, has made many times. Cities are complex ecological systems, and demand that we consider questions from the perspective of history, our hopes for the future and the current ecological realities. I was delighted that my thoughts on this topic were recently published in Asheville's Urban News.
I had gone to Asheville expecting early spring, but forgetting that spring is notoriously unstable, hot one day and cold the next. And even, as in this case, snowing. A snowstorm hit, and absent plows and sanders, the snow shut the city and its airport down. I was delighted to find that Bistro 1896, which was a couple of blocks from my hotel, was open for lunch and dinner through the storm and its aftermath. The restaurant had a delicious menu, light, flavorful, and fun. It is a place that captures the charm and friendliness of the region. I highly recommend it, should you happen to find yourself in Asheville.
Posted by Mindy Thompson Fullilove at 7:00 PM No comments: 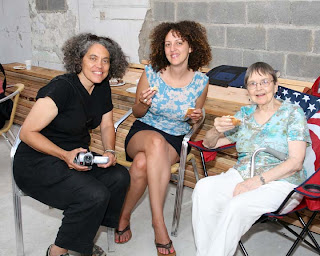 Monday night, July 20th, I attended a birthday party for contractor Mark Miller and developer Patrick Morrissy. It was held at an old industrial building that Morrissy's organization, HANDS, Inc., is redeveloping into a restaurant, apartment, and artist studios. The party was held in the unfinished artist studios, with their roof still open to the sky and trees. The sound and hearty core of the building is still visible. Coquelle's Bakery used to occupy the site, and Jeannie Morrissy shared memories of what a lively place it was, and what delicious brownies they made there. Miller and Morrissy are giving new life to the building and to the corner of Scotland Road and Central Avenue, which looks down on its luck. That perception will change this week when Anthony Wood, the proprietor of Daily Soup, opens for business. He has a keen sense of fun and a bright, spacious restaurant which shades from casual in the front to more formal in the rear. Last night he delighted the partygoers with frozen yogurt mixed with outrageous toppings. The young Morrissys, Claire and Tim, promised to try all the combinations of three and write about their findings in their food blog. Food is fun in Orange, and the air is full of possibility. This photo of me withmy daughter Molly and mother Maggie was taken by Herb Way, who graduated with me from Orange High School back in 1967.
Today -- the 21st -- I had lunch on Palisades Avenue with Bob Stern, who lived in Englewood for many years before moving to Montauk. When asked what he was up to, he confessed, rather sheepishly, that he was the president of the Concerned Citizens of Montauk and was fighting developers who want to do irresponsible building. As this is exactly what he was doing in Englewood, he wanted to be the first to admit "plus ca change, plus c'est la meme chose"!
Bob believes in democracy and makes it work by doing his part to hold people accountable to the larger society. He recounted lots of stories of confronting people who's irresponsible building poses a threat to the area's charm and sustainability. In listening to his stories of fighting of developers and their money, I was reminded of how hard Morrissy and his colleagues work to bring investors' dollars to Orange. In a reasonable world, the dollars that are poised to destroy Montauk would be redirected to Orange. Overdevelopment will wreck one beautiful and precious natural treasure, while underdevelopment is ruining a charming and creative little city. But the struggles of the two places are not yet linked, however much they need to be. Overdevelopment and underdevelopment are two sides of one coin: making a fast buck in real estate. Can we ease the greed and create places for people?
Posted by Mindy Thompson Fullilove at 3:01 PM No comments:

Karen Washington is a garden designer who has helped me transform my yard. This summer I have been enjoying the pleasures of the new design. I have been sitting in the yard to write while listening to the birds and watching the castor bean grow (it's a Jack-in-the-Beanstalk plant and grows right in front of your eyes). I wanted to thank her for this wonderful transformation in my space so I proposed dinner in Paterson. I found two Turkish restaurants online and I printed out the directions, in one case from Google and in the other from Yahoo. We started off following the directions, and just couldn't find the connections we were supposed to make. That's when it became apparent I hadn't printed out either the names or the phone numbers. I remembered one name -- sort of -- and we called for directions. We couldn't find those connections either, but at this point we decided to follow the signs which got us to Paterson. In Paterson we stopped a young woman coming out of a laundromat and asked how to get to Main Street. "Main Street?" she said, with what I thought was worry in her voice. "You go here and turn before the school, and go all the way down the hill and by the Falls and then to the bottom of the Falls by Burger King and then you make a left, and go to Main Street." At the part where she advised turning "before the school" my heart sank. But Karen got a big smile. "OK!" she said, thanking the woman. We headed off and sure enough, Karen knew exactly how to decipher "before the school," "by the Falls" and "left at Burger King." In no time at all we were on Main Street, heading towards we weren't exactly sure what. Suddenly, I saw a sign for "Alaturk" Turkish restaurant. I had seen this reviewed on the internet. We parked across the street, as advised in the window, and went in. I was a little intimidated, but a smiling young woman came forward and made us feel very welcome. We explained we didn't really know much about Turkish food. She immediately took an interest in introducing us to her cuisine and a feast of yummy dishes started to arrive from the kitchen, all fresh, delicately spiced and wonderfully fun to eat. The most spectacular was Turkish pizza, with a very thin crust and about two feet long, covered with chopped meat. She placed this on the latest edition of the Turkish news. We loved it. She explained that her family had just taken over the restaurant two weeks before. Her husband was the chef and he came out to say hello and we were delighted to tell him how much we enjoyed the food. They have great hopes for the restaurant which has a lovely space for a garden. When I explained that Karen was a garden designer, they asked for her card and took her back to see their yard. She immediately had visions of trees and arbors. I started thinking about grapes and how my own yard, transformed by her alchemy, is now such a wonderful place to pass the hours. When it was time to go, we asked for directions, got on the highway immediately and were home in less time than it takes to tell. I promised Karen that next time she goes on an outing with me, I'll take a map, the name of the restaurant, and the telephone number. She laughed.
Posted by Mindy Thompson Fullilove at 4:52 AM No comments:

I am reading Jason Goodwin's detective series, set in Istanbul. This has inspired me to go to Turkey. As part of my travel preparation, my friend and co-worker, Lourdes Hernandez-Cordero and I set out for lunch at Turkuaz, a Turkish restaurant on Broadway at 100th Street. The food was wonderful: very fresh, delicately seasoned, and reminiscent of the meals prepared by Yashim, the star of Goodwin's novels. We went to the ladies' room prior to leaving and there was a painting of women at the hamam. Lourdes and I love to go to the hamam at the Great Mosque in Paris, and we were lamenting the lack of public baths here in New York. There are some, but they tend to be expensive and not the neighborhood affairs that one can find in other countries. The painting also made us think of bra shopping, and we reflected that there must be a great bra store on Broadway, one of those great places where the saleswomen can tell your size by glancing at you as you walk in. We could have just strolled down Broadway -- and in the beautiful weather it was tempting -- but we decided to see what we could learn by phone. She called her friend, who knew of a store on Madison and 90th Street, but we didn't want to leave Broadway. I called my daughter, Molly Rose Kaufman, who immediately went on line and located a place at 77th. A quick cab ride and there we were at Bra Smyth, which was a revelation for me. A short time later, better fitted, dazzled by the wonders of Broadway, and happy with our fieldwork, we headed back uptown to tend to matters at the office.
Posted by Mindy Thompson Fullilove at 12:52 PM No comments: