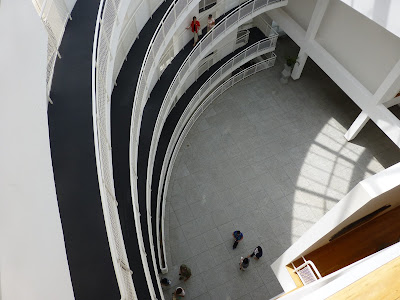 Saying, "High Museum of Art," is a challenge for me. I want to spin off into "Museum of High Art," and "High at the Museum of Art." I don't think the name could survive in the cynicism of New York, and I am sure it's iconic red label pin that simply says "HIGH" would have many many uses. OK, I got that off my chest. What the High Museum of Art has to do with Main Street is that it made me think of museums-as-main-streets. An early flight to Atlanta and late lunch appointment left lots to time, as I reckon these things, to spend at the museum. It happened that it was Toddler Thursday. One little girl went running up to another, grinning form ear-to-ear to see her friend. The parents were not that friendly, so it seemed like this was a "museum friend." I wanted to know why, so I followed the toddlers to "see, read and paint." They were to see a video installation on the fourth floor, where they would hear a story called "Shadow." Then they could go to the lower level children's art center where they could paint, plastic smocks and all. There were a ton of little people, well-equipped with strollers and snacks and whatever else the modern child needs to be away from home for a few hours. I do not pretend to know what that is. Anyway, there was also the crowd of interns on break lounging in sofas and telling very silly jokes. There were kids from the Atlanta Boys and Girls Club, a large group of seniors, another pretty large group in wheelchairs, random single people, lots of retired people in shorts: in fact, all kinds of people roaming through the big wide spaces of the museum. These ample public spaces invited people to move at their leisure in their own way -- by stair, by ramp, by elevator, quickly, slowly, stopping to take photos, going to galleries as one pleased. The analogy of the museum's public space to Main Street was one I surely would have missed if an avid photographer hadn't been bent over the railings of the central atrium taking photos of the geometry of curving ramps and straight walls. I was enchanted by what she saw and copied her. She didn't seem to mind too much. But then, I started to think about the building blocks of Main Street, those things that form the public space by offering entrance from the plaza to Something Different. The High Museum had a gift shop, a coffee shop, a terrace with an installation of massive fruit, a family art center, and many many galleries that took off from the public space, making it rich in variation and satisfactions, including there being three buildings, connected by bridges and sidewalks in intricate ways. The intricate and dense whole is larger than the sum of the parts, challenging, rewarding, welcoming, in other words, a Main Street.
Posted by Mindy Thompson Fullilove at 10:03 AM No comments: