On Main Street, in Bogota, Lillie Pearl's Comfort Food beckons with a neon sign that blinks, "Coffee." The sign caught my eye as I left the post office -- which is the friendliest one I've ever visited -- and stood scanning the street for my coffee options. On my first visit, I had a very fine cup of coffee and I got macaroni and cheese, barbecued chicken and yams to go. All high on anyone's comfort list, and all were highly rated by my family. I got to meet Lillie Pearl, for whom the restaurant is named, as well as Annette Coleman, the owner, who said as I was leaving, "Be sure to come for breakfast!" My husband Bob is a fan of soul breakfast so we were back the next morning for grits and eggs. "I had the same breakfast in Nashville, two weeks ago," Bob said. "This was just as good, and maybe the grits were better -- creamier and more buttery." You don't always think "Bogota -- I'll to go to Bogota and get some great soul food" but it's there!
Posted by Mindy Thompson Fullilove at 11:36 AM No comments:

Who's Got the Best Program? Orange Picks a Mayor 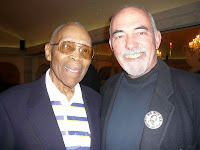 Ben Jones, first African American councilman of Orange, NJ, welcomed fellow residents to a Mayoral Forum on March 29th. Ben was all smiles as he admired Patrick Morrissy's historic campaign button that read "Win with Ben." People were gathered to meet five of six very impressive candidates for Mayor. The city- one of the Main Street towns I'll be following closely - was rocked by scandal in September 2007 when  Mayor Mims Hackett was arrested on bribery charges. Much is riding on the selection of a strong, honest leader.  I had the honor of moderating the forum which was held at the Appian Way.  The Forum was sponsored by Citizens for Responsible Government, CRG. CRG is a newly reconstituted group, drawing on the leadership of an older CRG: Citizens for Representative Government.  The earlier CRG was founded in 1958 to lead the struggle black representation and to improve the city.  My father, Ernest Thompson, was one of its founders. He told the story of this effort in his book, Homeboy Came to Orange: A Story of People's Power. One of CRG's early accomplishments was to lay out a 7-point plan for making a better city. That plan addressed: 1) redevelopment and relocation, 2) unemployment, 3) freeway (Route 280 which then on the drawing boards and now runs through the middle of town), 4) school system, 5) civil rights, 6) recreation and juvenile delinquency, and 7)representative government.  Citizens for Responsible Government used this outline to pose questions to 5 of the 6 citizens running for office.  The candidates were articulate and serious.  They gave very thoughtful answers.  The questions addressed different areas of concern, taking the listeners through the key issues of running a city honestly and effectively.  The lively, engaged audience paid keen attention -- you could have heard a pin drop for most of the two hour meeting.  The Appian Way is a remarkably welcoming site.  CRG is to be congratulated for organizing a meeting that helped us all understand how a city is governed while learning about the strategies that the candidates would use.  It was a serious day that ended with great hope for the future of the city.
Posted by Mindy Thompson Fullilove at 5:26 PM 1 comment:

From St Patrick to Paterson: A NJ Drive

On Sunday, March 9th, Molly Kaufman, my daughter, and A'Lelia Johnson, my granddaughter and Molly's niece, went to West Orange to see the St. Patrick's Day Parade on Main Street.  It was a fine parade with lovely pipe and drum bands from all over the state, parade organizers in convertibles, and a lively audience that appreciated the fine day and good music.  Just off Main Street, on Park Avenue, we passed a playground and A'Lelia, 12, insisted we play for a while.  The park has an outstanding 4 person seesaw.  A little boy joined us and we four bounced up and down in zigzaggy patterns.  Though we outweighed our little friend by several hundred pounds, he held on tightly, proving he has the talent for a career in horse racing.  We had planned to go straight back to Englewood but that seemed too tame for such a fine day.  After considering many ideas, we settled on driving back on the streets rather than the highways. There is no road that goes straight from West Orange to Englewood -- probably why they built the highways.  The roads stay out of the Meadowlands and follow the course of the Passaic River, which lies between the two cities.  In no time at all, we found ourselves in Paterson.  The southern part of Main Street, Paterson, is a middle Eastern neighborhood.  We stopped for coffee and Turkish pastries at Saray Bakery.  We strolled down the street to Fattal's Market, where we stocked up on their freshly baked pita, and delicious platters of hummus, baba ganoush, olives and stuffed grape leaves.

If you're in Paterson, you have to visit the The Great Falls, so we drove to the center of the city to see the second largest waterfall in the Northeast, after Niagara Falls. Paterson was an early center of American industry because of the power provided by the Falls. Alexander Hamilton, one of the founders of the nation, saw the potential of the area and organized its early development -- he's honored by a statue in the park around the Falls.  He made the point that the US should reduce its dependence on foreign products -- proving that what goes around comes around.  The roar of the Falls makes it clear how much power is involved in good-sized river suddenly dropping 77 feet.  Though it was a clear bright day, the water was cold and the spray had frozen in places around the viewing zone.  We were thrilled by the mist and the noise and the icicles.
Posted by Mindy Thompson Fullilove at 5:54 AM 1 comment: