I haven't posted in awhile -- too busy trying to keep up with daily life to have enough time to think about. But yesterday, which was April 9th, I saw the new Broadway production of "for colored girls who have considered suicide/ when the rainbow is enuf." The rainbow of actors instantly won me to their cause and I couldn't stand fast enuf at the end to join the standing ovation!

It was one of the rare moments in this time when my heart felt better -- that a deep truth had been revealed for me: that the rainbow is present in our suffering. Like a revelation, but only when we are broken enuf for the light to get in, thank you, Leonard Cohen.

And then I thought of the whole world, aching over nuclear bombs, Covid variant BA2, fracturing ice shelves, gas prices -- whatever. Around the world depression, anxiety, suicidal thoughts and actions have increased to remarkable heights. The ache in the world is palpable. I took the train to New York and a group of young Yankee fans got on, on their way to opening day. They were defiantly NOT wearing masks as required by the train. And they were drinking, also a No-No. But they were drinking as fast as they could, drinking to get drunk, drinking to be removed from whatever is on their hearts -- they, too, were longing for the rainbow but didn't know where it was.

And that is the trick with rainbows. A rain shower was ending as I drove into my driveway on my way home from the play. I looked up to see if a rainbow had come out. No, but my dog Toby greeted me at the door with hugs and kisses. 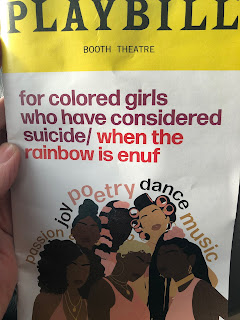 Posted by Mindy Thompson Fullilove at 7:54 AM No comments: