On April 13, 2013, Michel Cantal-Dupart, who inspired my new book Urban Alchemy: Restoring Joy in America's Sorted-Cities, was elevated in the Legion of Honor. The medal was awarded by the French Prime Minister, Jean-Marc Ayrault. The Prime Minister gave a long address, outlining many of Cantal's projects, especially those in Nantes, where Ayrault was Mayor for many years. Cantal, in his remarks, highlighted four phases of his life. The fourth started in 1993, when he met Bob Fullilove and me at Colloque Triville. In the course of travels and adventures in France and the US, I became convinced that Cantal's ideas were essential for the rebuilding of the American city. He related this conviction of mine to the Prime Minister and handed him a copy of the book (my book!). "This book has 302 pages, and my name is on 200 of them," Cantal joked, while encouraging the Prime Minister to read it. On his way out, after the ceremony, the Prime Minister stopped to say hello -- we have met a number of times in Nantes -- and to take a photo with Bob and me. 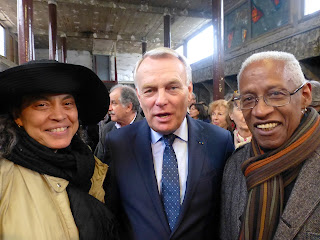 The ceremony was held on the peniche Le Corbusier, which has been designated an historic monument for multiple reasons: it was one of the first barges to be made of concrete, later it was converted by Le Corbusier to house homeless men, and most recently it is being renovated as a free university of solidarity. The barge is huge, roomy enough for the hundreds of people who came to the ceremony and to seat, in one room, the 120 who stayed to dinner. I am so proud of Cantal and all that he has helped us understand about creating fun, equitable, sustainable cities!
Posted by Mindy Thompson Fullilove at 1:17 PM No comments: