Wall and Will: Broadway after 5 visits 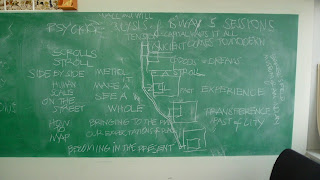 After five visits to Broadway, Hirofumi Minami, David Chapin and I sat down to reflect on what we had seen and felt. An article by Michael Kimmelman about Columbia's new building at Baker Field. It included a remarkable photo of the Broadway side of the complex, viewed from an elevation to the east. In that photo, you can see the bleak wall that we experienced walking. Hiro brought to our meeting several books, including a children's book about New York. That book contained the stark explanation that the wall which became Wall Street was built by the Dutch to keep out the Indians. I had never thought about the wall of Wall Street, but I had thought a lot about bleak walls Columbia turns to the neighborhoods in which its building sits. This feature of the university was brought to my attention by having an office just opposite such a wall. I felt mooned by the university -- not attractive, I can tell you. Anyway, our psychoanalysis thus started with walls, and continued to Indians, as we had visited the Museum of the American Indian at the southern tip of Manhattan, well inside where the wall used to be -- ironies of history that outsiders are now insiders. Of course there is another kind of wall, this one the wall of security and the old Customs House, making it project -- a terribly worthwhile project -- to get in to see the exhibits. I was struck by the irony of putting the National Museum of the American Indian in the old Customs House. We talked about the purchase of Manhattan for $24, which David pointed out is often seen as "steal." And this led us to think about Times Square and hucksterism as an enduring theme in the visual landscape of New York. Broadway runs more or less north until Zabar's, and we chuckled to think of that store as the inflection point of this great road. At Dyckman Farm House, we had quite a different reality--a step back in time--yet the continuity of every day we saw in Broadway in the 80s, as a sense of time and a sense of streets. Hiro heads back home to Japan this week and David and I will miss him. But the work goes on! A new exhibit on Broadway has opened at the Center for Architecture and we're off to see it.
Posted by Mindy Thompson Fullilove at 1:24 PM No comments:

Ron Shiffman is one of the extraordinary urbanists of our time. He was awarded the Rockefeller Foundation's 2012 Jane Jacobs Medal for Lifetime Leadership. Few people have done in the lifetime what Ron has done to fight for cities that are responsive to all their citizens. Ron's work for equity and respect have made a profound difference in the lives of all New Yorkers. He has affected the development of communities, the careers of students, and the direction of the planning, architecture and community development fields. His remarks were posted along with a video of Ron and other materials, on Norman Oder's blog, Atlantic Yards Report. Ron's remarks, slightly shorted for the presentation were as follows: I am truly honored to be this year’s Jane Jacobs awardee. Jane played a pivotal role in forging the way we think about people, cities and the economy. The position I filled at Pratt 50 years ago was ironically created because of Jane’s advocacy against a Pratt planning proposal for an area of Brooklyn now known as Boerum Hill, Carroll Gardens and Cobble Hill– an action I will forever be grateful for. Brooklyn benefitted because a well intentioned but misguided plan was defeated and I benefitted because I got the job opportunity of a lifetime - for that I would like to thank my mentor, George Raymond. I had the honor to meet Jane a few times, almost always with my good friend Roberta Gratz. In the early 70’s, Roberta and I took Jane on a tour of the South Bronx where my colleagues and I were working with community residents committed to rebuilding their communities - the Peoples Development Corporation and Banana Kelly. Jane immediately sensed that this -- not planned shrinkage as proposed by some --was the way to rebuild our vulnerable communities. One of Jane’s greatest attributes was to give voice to those who struggled to preserve and revitalize their community, an effort which many others were engaged in -- Elsie Richardson, Don Benjamin and Judge Jones in Bedford-Stuyvesant, Ramon Reguiera in South Brooklyn, Elizabeth Yeampierre in Sunset Park, Yolanda Garcia and Kelly Terry-Sepulveda in the South Bronx, Fran Goldin in Cooper Square, Chino Garcia, Rabbit and Ruthie Nazario and Demaris Reyes in the Lower East Side, Ellen Lurie and Roger Katan in East Harlem, Luis Garden Acosta, Frances Lucerna in Williamsburg, and Pat Simon and Jeanne DuPont in the Rockaways, and many others. Jane understood the struggle of groups like Develop Don’t Destroy Brooklyn, where Daniel Goldstein and Shabnam Merchant whose opposition to the misuse of eminent domain and the abuse of power by some in the development community pitted them against the some of the city’s most powerful entities. She inspired journalists like Norm Oder to put voice to their struggles. She set the stage for community organizers like Eddie Bautista to mobilize communities to speak out against environmental injustices. This award must be shared with them and many others in and outside of this this room. I would be remiss not to mention that Jane’s influence was enhanced by knowing and working with advocates like Paul and Linda Davidoff, Chester Hartman, and Walter Thabit, Jon Kest and the rest of the activists at ACORN as well as folks like Richard Kahan, Joe McNeely, and Mayor David Dinkins. I also want acknowledge my wife and partner of close to 54 years, Yvette –whose influence and support has been immeasurable. This award is as much hers as it is mine. I want to acknowledge my kids and their respective spouses, and my brother and sister–in-law –all have been a source of motivation and support. My grandkids motivate every action I engage in. I will always be indebted to those that worked with me at the Pratt Center – Rudy Bryant, Brian Sullivan, Cathy Herman, Naomi Johnson, Eva Alligood, Rex Curry, Frank DeGiovanni, Mercedes Rodriguez, Mannix Gordon, Eve Baron and Joan Byron, and many others too numerous to mention, for they all sacrificed and contributed mightily to the work we engaged in collectively. I’d like to acknowledge my successors at the Pratt Center -- Councilman Brad Lander and Adam Friedman and to the Pratt administration that supported our efforts – President Thomas Schutte and Richardson Pratt before him and trustees Mitchell Pratt and Gary Hattem. My thanks go especially to to the students of Pratt that kept us focused on innovation and true to the principles we espoused, and to my colleagues on the Pratt Planning faculty –Eve Baron, Eva Hanhardt, John Shapiro, Ayse Yonder, Carlton Brown, Jaime Stein, Eddie Bautista and Stuart Pertz ably led by John Shapiro. Most importantly, I want to thank the people we worked with that taught me to build upon their assets to help them overcome their problems—problems often spawned by public policies that fostered displacement and allowed poverty to fester in many corners of our city. We have accomplished much over the years that I am proud of, but we have left yet undone a plethora of problems that the next generation of planners, community activists and organizers must continue to address: * the social, economic and environmental injustices that make us all weaker, * the privatization of public space and public functions, * the growing economic segregation of our city or, as Mindy Fullilove, my friend calls it, the “sorting” of the city, and* the challenges of climate change – which we must aggressively and creatively confront. On behalf of my grandkids and their generation, I fervently pray that all of us in this room are ready to tackle these problems with renewed vigor. As an unapologetic optimist, I do believe that we will overcome these challenges with vision, commitment and an ever-abiding trust in our neighbors and that we will prevail.
Posted by Mindy Thompson Fullilove at 7:09 AM No comments:

David Chapin, Hirofumi Minami and I are carrying out a psychoanalysis of Broadway in five sessions. Session 5 on March 1, 2013, took us to the Dyckman Farmhouse, a Dutch colonial farmhouse built about 1784. It sits on a small hill, just above Broadway, surrounded by stone retaining walls topped with an iron fence. It is a place that takes us from colonial times to the present, in the life of New York City. It was the home of family that ran a working farm until development in the early 1900s ate up the land and changed the area's way of life. The farmhouse was saved from destruction and made into a museum, helping us get a sense of the story of Manhattan. Some of it is marvel at: cooking over an open fireplace, sleeping in the big open attic or in small rooms with no heat! The presence of slavery in New York State reminds us of the long struggle for abolition, which we celebrate this year, with the 150th anniversary of the Emancipation Proclamation. Looking out the windows or strolling the garden, the apartment buildings that took over the farmlands are all around. 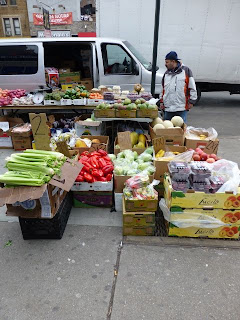 Once the farmhouse had a view to the Harlem River, but no glimpse can be had at this point. After learning about Colonial era cooking and sleeping, we went out to lunch in the neighborhood at Chacapas on Dyckman Street, named for the family that owned the farm. The leap forward into our own intensely inhabited, multi-ethnic world was eased by yummy yummy food.
Posted by Mindy Thompson Fullilove at 1:36 PM No comments: