After tragedy, we need to "do something"

When the towers fell on 9/11, I became obsessed with thinking, "What can I do?"  I worked on that day, and much of the night, for a year, working with friends and associated to create NYC RECOVERS, a collaboration of organizations in the NYC region concerned with the area's social and emotional recovery from the attacks on the World Trade Center.  We made a short film about the project and interviewed many of our collaborators.  Quite a few used some version of the phrase, "I needed to DO something."  It was so universal -- this need do DO something -- that I began to look for it after other shattering events.  It always appears.

But I learned, as well, that events are not always legitimized as times of action, in the way that 9/11 was.  That can leave people adrift, wondering how they are supposed to respond or, worse, just feeling terrible.  It is easy for that feeling to become hopelessness and helplessness.  Our grief and fear need outlets in times of stress.  I am a big fan of the Design Studio for Social Intervention which has proposed making a poster about what to do in a social emergency.  An AIA colleague, Randy Collins, made a prototype in response to their query. 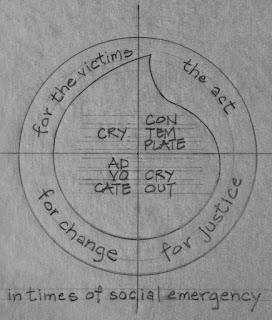 I like Randy's teardrop in the center, surrounded by four stages.  It is useful to know that we start by crying for the victims.  Sometimes people are crying and sad, and they start to blame themselves -- unsure what else to do.  So it's helpful that Randy shows us next steps.

I was thinking about this after the spate of tragedies we've been through in July, and was very touched to read that the Broadway production of "Fun Home" wanted to DO something about the tragedy in Orlando.  They decided that their play, which deals with sexual identity and suicide, had something to offer, so they arranged a special performance at a benefit there.  One of the actors, Michael Cerveris, wrote in the NY Times about the special bond between the actors and the audience that night.  He wrote about the audience reaction to the play:


We sat motionless onstage, weeping. Not for ourselves, but for what had happened here, for what this community had brought in their hearts tonight. And then came an ovation that was a roar, a catharsis and a celebration of love and life. We bow to standing ovations after every performance. There has never been one we will cherish more.

We DO something after tragedy because we must -- we must move forward, affirming love and life, and at the same time, we must honor the hurt and grief.  To DO something is to go on living.
Posted by Mindy Thompson Fullilove at 4:32 PM No comments: