Get the military off Main Street!

The horrific scenes of civilians confronted by military might on a suburban Main Street have shocked us all. We didn't know that the military had given weapons of war to local police departments all across the nation. And we didn't know the next images of war we'd see would be on our own Main Streets. It's bad to see these horrors in Gaza or Iraq -- but Ferguson is Home! It seems to me, from looking at Main Streets over the past 6 years, that actually Main Street is where strange shifts pop up. It is the center of the city and things can't float around in the culture without bobbing up on Main Street. This is a thought I call "Main Street Beach." When I told Tony Hiss, the great writer about place, that I thought Main Street was a beach, he said, "I've thought the same thing." I pulled out my father's book, Homeboy Came to Orange: A Story of People's Power, and found good advice: 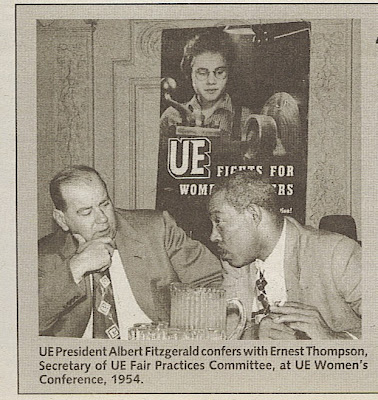 “In the struggle to build pure coalition we learned many lessons… Our experiences--the lessons of this book--are desperately needed in today’s world to help humankind learn to live together… We have no more time for war, or exploitation, or poisoning the earth. We must learn to live together now.. These tasks are too crucial to be entrusted to the warmongers and the profiteers. The money-changers must once again be driven from the temple so that the people can prevail, for only the people can be entrusted with their own future.” My dad, Ernest Thompson, was an organizer with United Electrical, Radio and Machine Workers of America, and then became a community organizer in Orange, NJ, where I grew up. You can see more stories of Orange and its lessons on the Facebook page of the University of Orange. A group of us started the University of Orange so that the people's voices could be heard in making the future city. I learned from urbanist Michel Cantal-Dupart that we create the city we want by finding the intersection of REASON, MEMORY and IMAGINATION. 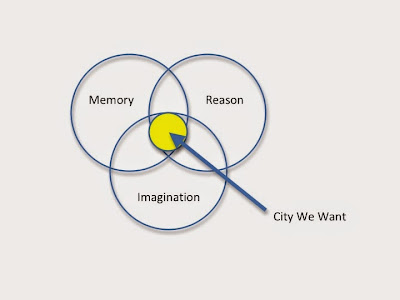 It is our collective work, examining the city, that yields this vision of the future. In their history and day-to-day living, the citizens of the city have acquired the wisdom of ages. The city as a collection of buildings and streets and parks and statues and stores and schools embodies our past decisions -- it is the path we are walking. The path, as we see in Ferguson, is broken by injustice and oppression. If we do not throw the money-changers out of the temple, and shift our path towards equity and invention, we will be in for more of the same: quiet desperation broken by shots and shouts. "Hands up, don't shoot" will echo everywhere. But the people CAN be entrusted with their future. In 1968 -- at time where riots were rocking hundreds of American city -- the citizens of Orange faced a severe challenge. The powers-that-be opposed urgent investment in the city's schools. People mobilized and put pressure on every possible arm of government. They expressed their will that excellent schools be built. They won. Because of the volatility of the moment, Councilman Ben Jones told me that there were tanks in the high school football stadium in case a riot broke out. It did not and the schools' crisis was resolved in the best possible manner. The University of Orange, which I am proud to serve as president of the Board of Directors, sees the essential work of our era as mobilizing the citizens to grapple with REASON, MEMORY and IMAGINATION to come up with the city of future. Needless to say, we will get the military off Main Street!
Posted by Mindy Thompson Fullilove at 11:04 AM No comments: