I go to Palisades Avenue in Englewood nearly every morning at 7 AM. I have come to expect it to be dark and dreary. 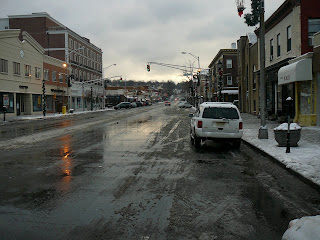 Much to my surprise, this week I arrived to find that it was considerably brighter. What a relief! Winter is far from over -- snow is expected today in fact -- but nights are getting shorter and the days are getting longer so Spring cannot be far behind. All of this made me think about seasons on Main Street. Main Streets are tenaciously busy: the tracks in the snow are mute testimony to the many comings and goings throughout the day and night. But the ways of moving are tempered by weather. People walk quickly and rush inside on cold winter days. They linger over their coffee cups looking out the window with dreams in their eyes. In the summer they don't want to go in and they drink ice coffee while delighting in the patterns of the sidewalk ballet. In an urbanized world with cars and indoor heating we tend to keep going no matter what. We can lose sight of the cycles of the natural world, as I did in thinking it would always be dark at 7 AM. Yet if we look more closely, we find Copernicus was right and Main Street, like the rest of the Earth, revolves around the sun. 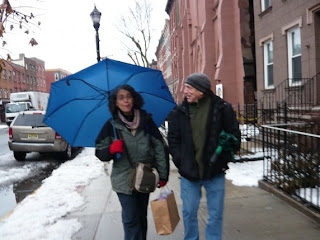 Professor Hirofumi Minami, an environmental psychologist from Japan, was in town for a visit just before Christmas. David Chapin, an architect on the faculty at CUNY Graduate Center, had hosted Hiro during a year-long stay that began in September 2001. For Hiro, whose research has focused on the recovery of Hiroshima after the atomic bomb attack in 1945, that was a remarkable time to be in New York. The three of us collaborated in an effort called "NYC RECOVERS," an alliance of organizations concerned with the social and emotional recovery of NYC after the attack on the Twin Towers. Hiro's knowledge of the recovery of Hiroshima was very inspiring to us. He pointed out that, in Buddhist tradition, the seventh year after a loss is a very important point in recovery. So, reconnecting in this seventh year after 9/11 was a great experience for the three of us. After much discussion, we decided to visit Hoboken, NJ, where I used to live. Both Hiro and David had read about my life there in my book, House of Joshua: Meditations on Family and Place. On Christmas Eve we set out to see three parts of Hoboken: the light rail stop at 2nd street, the new riverside park, and Washington Street. I proposed the light rail stop because the station is surrounded by a fence that cuts off access from the housing projects. We got the light rail at the Hoboken rail station, an elegant place with historic connections to the river and the world. We had a great ride on light rail and appreciated its speed and simplicity. While you might think that you would most want poor people to be able to access public transit, that does not appear to be the case in this instance. The fence at the 2nd Street station was a shock to my friends, as I thought it would be. Indeed, I was shocked myself, seeing it again. Why not put in a gate? We got back on the light rail, thinking to go back to the rail station, but instead ended up at Newport Mall. The crowds getting on and off there made it clear that the light rail is big help in the local system of movement. Another train took us back to Hoboken, and we walked over to the riverside park which is just next door. David pointed out that the park was deserted. Although there were a lot of people out, there was not much to do by the river on a rainy day and people were staying away in droves. About this time I got a call from my daughter Molly asking if I could get some yarn for a present. She quickly googled yarn and found out there was a store on 4th Street. Hiro and David were happy to go with me. We found Patricia's Yarns easily. Its warm display of yarn and the fortuitous presence of some happy young knitters inspired us all to buy yarn. Outside, David pointed out an empty store which used to be a unisex salon, a term he dated to the 1970s. Patricia's Yarns, by contrast, was definitely Hoboken now. We walked north on Washington Street, which Molly believes to be the best place in New Jersey to do Christmas shopping. David and Hiro were happy to stop again at Big Fun Toys for more last minute purchases for my grandchildren. David got interested in the absence of war toys which led to lovely conversation with the store personnel. Hiro and David agreed that doing a bit of shopping was an excellent way to get past the facade of a town and start to feel a part of its rhythms. I have found that having lunch also helps to get a sense of Main Street wherever you are. I proposed the Elysian Cafe. the Cafe is housed in space that has been a Hoboken eatery for more than a hundred years. Lovingly restored by Joyce and Eugene Flinn, the cafe has a Paris Bistro menu and feel. It was calm by the time we got there for a late lunch. Over lunch, we talked about cities. Hiro explained to us about urbanization in Japan, which began with his parents' generation and has continued in his. Managing the farms is becoming a pressing question, he told us. David spends his summers in farming country in Ohio and had much to add ab0ut the development of ex-urbs. As our time together drew to a close, we agreed that we should meet again soon and share visits to other cities in the US and Japan. (photo: Mindy Fullilove and David Chapin walking on Washington Street, taken by Hirofumi Minami)