Coronavirus: Hope you are well and vaccinated!

For months, like everyone with whom I correspond, I've started emails with the prayer, "I hope you and yours are well."  I got my first vaccination shot on Thursday at Kmart -- one of the sites Essex County, NJ, is using.  It was an awesome experience in logistics.  I arrived for my 2:10 appointment and was out by 2:30 -- that included the 15 minute waiting period!  I'm very proud of my vaccination card and looking forward to next month when I'll be fully vaccinated.  In my mind, I'm planning all kinds of crazy things, although I realize that we're not out of the woods with the variants and probably I need to calm down.  So today I was writing to a friend my age -- that is to say, old enough to be vaccinated already -- and I found myself making a new wish: "I hope you are well and vaccinated!"

Sunday, February 22, 2012, The New York Times had a stunning graphic of the nearly 500,000 deaths from Covid-19.  This graphic occupied the middle of the whole front page.  The headline of the lead story, to the right, was "Storms exposing a nation primed for catastrophe." Another section had the word "Unraveling" as its graphic, for a story about people with dementia falling apart during Covid.  And the Home section had an image of a person, under the covers, lingering in bed, captioned by the words, "We're lingering just a little while longer." 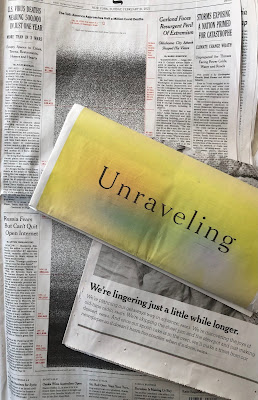 When I was a medical student rotating on surgery -- which was one of the highlights of my life -- we had a patient named Mr. Rodriguez who had pain of unknown origin which seemed to be located in his leg.  He stayed under the covers, moaning, and the fellow medical student who was in charge of his case referred to this as "UTB" -- under the blanket.  The team debated amputating the painful leg, well aware that this was not necessarily reasonable or even a cure: it was just what surgeons could do and he was on a surgical service.

But here I am, 40+ years later, lingering under the covers, just as the Times said, identifying with Mr. Rodriguez and his moaning.  I have developed a second method of being UTB: watching a lot of TV.  I'm never been a TV watcher before this. My ability to operate my TV is limited.  I have, however,  got a "Netflix" button on my remote and Netflix, it turns out, has a very large supply of kdrama, and this, it turns out, is a very good blanket.

My delight in kdrama is utterly unexpected by me, as I'm not that interested in popular culture.  But apparently South Korea knew me better than I knew myself: throw some life issues, romance and silly jokes together with a good soundtrack is all I am looking for.  I think it helps that these are not American stories.  Not one to do things by halves, I joined the masses learning Korean and I have listened carefully to the soundtracks, as half the story is in the songs.  I joined a TV Club, which helps me understand what I'm seeing.

I have asked numerous wise people if binge-watching kdrama all weekend is bad for my health and I have been reassured that it's quite normal.  I think what they are saying is that it is OK to have some laughs on the weekends, as they help me squarely face the truths, like the truth that our nation is primed for catastrophe.  It has been the work I chose for myself -- to name the processes that were tearing at the nation and to explain them to other people.  I do this because I was trained as a physician that correct diagnosis leads to correct treatment.  I love the work, but, despite my lifelong habit of working all the time, I just can't do that at this moment.  I need to sneak away and watch some incredibly beautiful movie stars stare deeply into each other's eyes, while the theme song swells in the background.  I need to see the antics of the designated clowns, which keep me chuckling even while reading about catastrophe all week long.  I need to see stories I've never seen before, like the fracture of Korea into north and south.

UTB is temporizing, a kind of partition of my own life, a respite.  Paradoxically, it is helping me grow as a person -- I'm learning my limits, expanding my horizons, learning a new language.  I think I'm learning something else, which is that these kdrama songs and stories of yearning are the real meat-and-potatoes of my life just now.  I am yearning for a vaccination, a vacation, world peace, better national infrastructure, the reunification of the Korean peninsula, the salvation of all the species.  Watching two people who yearn for each other stands for all my yearning and I clap and cry when they connect.  It gives me hope.