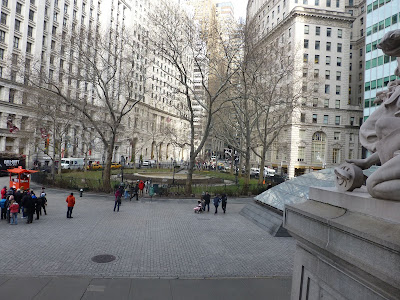 David Chapin, Hirofumi Minami and I have dubbed our project "A Psychoanalysis of Broadway in Five Sessions." Hiro started the project of the psychoanalysis of cities on his visit to New York in 2002. We are looking at the intersection of that with my project of Main Street, by walking parts of Broadway. Having explored the Northern Manhattan end of Broadway on our last outing, this week we went to the Southern end and found two origins: the physical origin of the street and the the historic origin, at least metphorically, in the National Museum of the American Indian. This is a spectacular museum which has the particular quality of being free and open 364 days a year (closed on Christmas). We explored the exhibits, which display the remarkable cultural treasures that George Gustav Heye assembled in the first part of the 20th century. The diversity and the beauty of the collections help us see how many different ways people had invented to live in the Americas, long before European contact. I walked out onto Broadway almost expecting to see the old Indian Trail, just as Tony did when he went through the door in Howard Fast's novel. Instead there was a vista of great beauty, the opening onto the Canyon of Heroes, where New York City holds its ticker tape parades (see the photo of the view from the stairs of the museum). The sidewalks are lined with granite markers commemorating the parades, held for war victories, heroic deeds, and athletic accomplishments. Just there, in Bowling Green Park -- the first park on Broadway and the first to be established in New York City -- is the bronze bull, swarmed by tourists. A few blocks up we came to Zuccotti Park, made famous by Occupy Wall Street. Just past the park to the west are the emerging buildings of the World Trade Center. Trinity Church and St. Paul's Chapel remind us how historic this small bit of New York really is. We had directed our trip to City Hall, which is the end of the Canyon of Heroes. I felt heroic myself, having been in the presence of so much history. But I was also really really cold. We decided to have lunch at Pain Quotidien, over by the river, across from the Irish Hunger Memorial. It was curious to see it, as a few days before Christmas a friend told me about the great effort Americans made to send food to Ireland. Among those involved in this effort, he said, was Frederick Douglass, the great Abolitionist. To be in the presence of the memorial, and then to sit at the communal table with friends and strangers was a profound experience. I was cold, I got warm. I connected a story with memorial. I had soup, and felt better. Was that what Alain Coumont had in mind when he started?
Posted by Mindy Thompson Fullilove at 6:34 PM No comments: