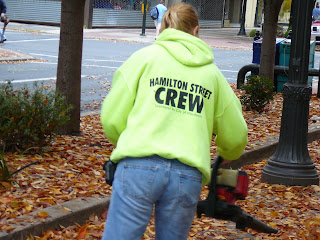 I had a wonderful visit to Muhlenberg College in Allentown, PA. In addition to spending time on the lovely campus, I got to poke around in the city, enjoying Historic Allentown especially. I walked on the Main Street, Hamilton Street, and took pictures as I do everywhere I go. In front of the city's tallest building a guard warned me that it was forbidden to photograph that location. There were no signs announcing this, but he insisted that if I were spotted on the cameras, the police would be called and they would take my camera away. My attachment to my camera is profound and this antagonized me, though I tried to remain civil. "I'm just telling you," he said in a tone that was none too friendly, which provoked me further. I looked around at their all-too-empty street, and thought, "That's why nobody's here: you lot don't trust people." This, of course, was a snap judgement based on annoyance and not information, but sometimes bad judgements provoke closer inspection and help us get closer to the truth. This was such a time.
As I walked along, the people of Allentown set out to disprove my unfair idea about their friendliness. I was taking a picture of the New Museum when a passerby smiled and pointed out the Indian Store, which she said she loved and she showed me the ring she'd gotten there. She also showed me two lovely bracelets she'd gotten at the dollar store. A young man, wearing a dollar store uniform, walked by and smiled and said hello in a very friendly manner. I laughed at a bit of urban collage made by someone who had the bright idea to add two stickers of eyes to a piece of abstract art on the wall of a very ugly building. The silly eyes humanized the whole thing, and seemed to saying, "It's OK!" Then a woman blowing leaves as part of the Hamilton Street Crew said that she was making a pile and I could jump in in a minute. She laughed and so did I.
By this time, I was in a much better mood. I climbed up on the Civil War Monument to get a picture down the length of the street. I expected the police to arrest me as the forbidden building was looming on the horizon and I got it in my photo, but I got clean away. I stopped to admire the ruins of an old bridge that crossed the rushing Jordan Creek, and which was beautifully decorated with a graffiti refrain that read Jesus Saves. "Is spray-painting a religious slogan a sin?" I asked myself, still a bit stuck on crime and punishment.
At the college a bit later that morning, one of the students described Main Street in her hometown and said that there's a lot of violence on Main Street so "nobody" goes there. This, of course, raised a paradox: if nobody goes there, who is doing the violence? Anyway, in that case violence was keeping people away, while in Allentown I was wondering if repression were the cause.
With so many questions in my head, I figured I should go the Visitors' Center and get some information. The woman who ran the place was very helpful, and I learned that there was an outstanding regional art museum, just 3 blocks away. I immediately went over, and was rewarded handsomely by the chance to see an outstanding exhibit of artists who had funded by the Julius Rosenwald Fund to do work on Black life in the 1930s and 40s. I knew a few of the paintings, but not most, and the sculpture and dance were entirely new to me.
As I exited the museum, uplifted by the chance to imagine the world in a new way, I was struck by a block-long paved plaza across the street in front of the museum. It was bounded to the north by a large bronze horse that flanked the Art School, to the east by a mural with a wonderful trompe l'oeil, and to the south by a historic county building. The plaza was not empty: people were having lunch, walking to and fro, chatting, enjoying the beautiful fall day. It was a place anybody would go.
Posted by Mindy Thompson Fullilove at 7:24 PM No comments:

I went to Raleigh, NC, a while back, and to Birmingham last week. The two cities have this in common: they have a black Main Street parallel to the white Main Street. In decades past these were flourishing streets, home to an array of businesses and cultural institutions. Much of the strength has drained away, as commerce has shifted to other sites. But the streets remain a vital part of the history, including the history of the struggle for civil rights. My visit to Birmingham was led by two veterans of the civil rights movement there. As young people, they had faced the fire hoses and been to jail. They remembered the police coming down black Main Street and every spot in the days of confrontation. "We were having a ball," remembered one. His sister had more somber reflections. She pointed to a photograph of one of the girls killed in the bombing of the 16th Street Baptist Church and said, "That was my best friend." The others who died were also part of her world, and the seriousness of her experience weighed in her voice. The struggle to undo segregation was essential for survival, and it meant that the side-by-side Main Streets would face a new future. Desegregating the lunch counters, the movie theaters, and the clothes stores eliminated the need for redundancy which fell hardest on the black side. But that it did was a failure of the commercial sector -- the Chamber of Commerce and City Hall -- to envision how to reorganize and repurpose existing stores and experienced business people. This is a sad pattern in our nation's economy. White Main Street faced a similar crisis when malls drew commerce from downtowns. The current downsizing is revisiting that problem, albeit that China is taking over, not white Main Street. How does that which is redundant by one yardstick come to have new usefulness by another? This is a fundamental question that we should ask and answer throughout our nation.
Posted by Mindy Thompson Fullilove at 7:28 PM No comments:

Homesteading on the urban prairie 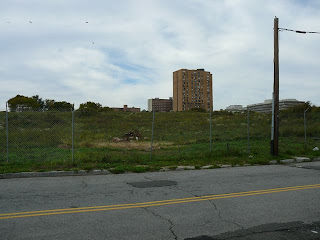 The large spaces in cities weigh heavily on urban function. They are evidence of really really bad policies carried out in the past. They cry out for really really good interventions in the future. Ecologist Rodrick Wallace, co-author of A Plague on Your Houses, has pointed out the policies that led to the burning down of New York, Newark, Detroit and other cities replaced urban renewal when that program became the target of citizen protest. The replacement policy -- planned shrinkage -- itself went out of vogue, but has had a recrudescence lately. Politicians and policy makers have proposed planned shrinkage for Youngstown, Flint, Detroit and other cities with substantial amounts of vacant land. The proponents of planned shrinkage argue that the best thing to do is to consolidate functions in the best developed parts of the city and let the semi-deserted places be bulldozed, and left fallow for later development.

Walking past a very large empty block in Newark, NJ, I considered this proposition. What is left unsaid in the paens to planned shrinkage is that such upheaval is the cause of social disruption and disease which is impossible to control. Indeed, the fallout of planned shrinkage in New York includes a chilling list of epidemics that includes AIDS, crack, violence, asthma and obesity, as well as associated social problems like high rates of infant and maternal mortality, school failure, and delinquency. What sane society would choose such a self-destructive path?

What is the sane alterative? I have seen glimpses of it in cities all over the US, where people are working to restore the urban ecosystem, using a combination of tools designed for careful recovery. They must restore the space, protecting what exists and rebuilding where needed. At the same time, they must get people excited about the possibilities for their own living in the restored space.

I saw this two-pronged approach come alive this weekend at the Valley Arts District Open Studio Stroll in Orange and West Orange, NJ. The Valley was an industrial center, but its big factories are now silent, and much of the area abandoned. Out of years of community planning came a vision for making the Valley an Arts District. For several years this plan has been pursued by builders building, artists creating their works, and organizers gathering people. In "don't you love it when a plan comes together" fashion, the places were finally open, the art ready for display and the people eager to come. The joy and excitement were palpable, the experience fulfilling, the possibilities for more development nearly endless.

The existence of large spaces in cities is unnatural and intimidating, but it should not automatically lead us to think, "Oh let's bulldoze the whole thing." We can reknit cities, restoring the urban ecosystem, by systematic application of the principles of careful recovery.
Posted by Mindy Thompson Fullilove at 12:39 PM 2 comments: