Pope Francis said, "It is important that the different parts of a city be well integrated and that those who live there have a sense of the whole, rather than being confined to one neighborhood and failing to see the larger city as space which they share with others. Interventions which affect the urban or rural landscape should take into account how various elements combine to form a whole which is perceived by its inhabitants as a coherent and meaningful framework for their lives. Others will then no longer be seen as strangers, but as part of a 'we' which all of us are working to create."
Posted by Mindy Thompson Fullilove at 2:37 PM No comments:

How ya gonna keep em on down on the farm after they've seen Paree?

The post World War I hit song, about the changed expectations of the returning soldiers, raised a profound question for the anti-change "Main Street," depicted by Sinclair Lewis in his great novel of that era.  But what happend "over there" that changed people?  One remarkable story was found in Paris Noir, by Tyler Stovall on the Washington Post website, relating to African American soldiers, who were relegated to menial tasks but astounded everyone by carrying them out in a superlative manner.  Here's a part of the story:


In contrast to the poor opinions the army leadership expressed about their abilities, black laborers in France often performed impressive physical feats, especially black longshoremen. To an important extent port workers formed the linchpin of the entire American military effort in France. The United States Army had never before fought such an extensive campaign so far away from home. Unloading and deploying both soldiers and war material in French ports had to be done as quickly and efficiently as possible in order to ensure an Allied victory. By the middle of 1918, large numbers of black longshoremen were busy unloading American ships in French harbors like Brest, Saint-Nazaire, and Bordeaux. Many of these workers had never even seen a ship before coming to France, much less worked on one, and yet their accomplishments frequently astonished French and white American observers alike. One compared their speed to that of Noah loading the Ark, and another commented, "They are the finest workers you ever saw. One Negro can do four times as much work as any other man, and have fun doing it. The French stevedores stand by and watch with amazement at my hustling gangs. The way they handle a 100-pound crate makes the Frenchman's eyes bulge." In one instance, African American longshoremen unloaded five thousand tons of material in one day, when French officials had estimated that six thousand could only be moved over an entire month. During the month of September 1918, black stevedores set a record by unloading an incredible twenty-five thousand tons of cargo per day for several weeks.

These achievements are astounding -- the question I'd like to pose is: what is it about agricultural work that the men brought to this new task and that allowed them to excel?  At any rate, what we do know is that when they got back, they were intolerant of abuse on the farm and many moved to the cities.  Jacob Lawrence's magnificent paintings of the Great Migration, recently shown in their entirety at MoMA offer a way of understanding the decision that people made to go to the cities and start a new life.  That is a major story of Main Street, at least as Sinclair Lewis sees it.
Posted by Mindy Thompson Fullilove at 12:39 PM 1 comment:

Coherence in the midst of confusion

For three days this past week, September 15-17, I walked Main Street in downtown Rochester. First, I walked west to Susan B. Anthony's house.  Then I walked east to the Eastman Concert Hall.  I saw many remarkable and wonderful sights.  I was struck, however, by a certain choppy quality -- most Main Streets cohere -- this one seems more like a set of beads, loosely strung together.  For example, I saw Civil War-era stores, a monument to transportation, the famous Powers building, the river with its beautiful park, lots of photos of the history of Rochester, the former Woolworth's building, the ticket office for the upcoming Fringe Festival and the Eastman Concert Hall.

It seemed like it should be a great Main Street, but the whole belies the promise of the pieces.  In that state of confusion, I passed a calm-looking young man, standing with a blue paper.  He did not hawk it or intrude: his pose was the offering.  But of what?  Curious, I approached him to ask.  Brother Brian Lee Griffin, chief assistant to Minister Lawrance Lee Evans,Sr., offered me a copy of "Doology Notes in Case Management," aka "Black Coptic Press Release."  He explained upcoming cultural events that I might like to attend.  "Doology" was invented in Rochester by Minister Lawrance, and it teaches that positive action is valued more than just complaining.  Brother Griffin, by adding to the coherence of Main Street, was certainly practicing doology.

Posted by Mindy Thompson Fullilove at 11:16 AM 2 comments:

Can a bridge save the rhinos?

During my visit to Erie, PA, back in August, I had the opportunity to meet Abdullah Washington, aka Bigg Wash, a poet and commentator on the local scene.  He wrote a wonderful article on the need for the viaduct on the city's East Side. I advocated for that during my visit.  I was particularly grateful that he mentioned my plea for "urbanism-informed" decision-making.  Our nation has not had a particularly happy attitude toward its cities.  As a consequence, we have carried out a long series of policies that have taken quite decent cities and messed them up.  If we all had some understanding of urbanism, we would do a lot better at managing the critical resource of having people live in close quarters.  Aside from being more sustainable and fun, cities are sites of invention and there is nothing we need more at this moment than invention.  We need to invent jobs, peace, and protection for all the species with whom we share the planet.  The new UN report on the massive rise in population makes me fear that the rhinos and the elephants aren't going to make it.  But who knows what we might invent if we make great, inclusive cities as sites of co-existence?  What is a bridge? asks Washington.  "A bridge is connection. A bridge is hope. Save the viaduct."  I would add, "Learn the lessons from saving the viaduct, and save the rhinos."
Posted by Mindy Thompson Fullilove at 10:39 AM No comments: 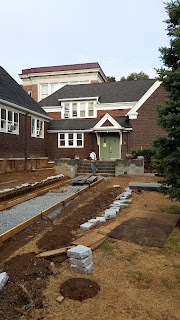 I go to church at the First Unitarian Universalist Church of Essex County, right off Main Street in Orange, NJ.  I went to church there when I was a girl and love that it is a place from my childhood largely unchanged.  It is unchanged as a building and a place of spirit, but the number of congregants has fallen so far that last year we talked of closing the church -- we might have to, but for now we are reinventing it as a campus for community life and a new kind of potluck worship.  Darcy Hall is the lead inventor.  She has a keen ear for spiritual readings and knows how to link them with things to do that adults like.  Last night, we had our first Soulful Sundown Service on the topic of friendship.  She read a lovely essay about the challenges of friendship and then proposed that we write haiku.  This was just great, as the essay had brought up so many thoughts and people each had their own slant.  We did a lot of singing -- Bill Stafford got great music out of the upright piano in our Parish Hall.  Though we were not many, we sang with gusto and filled the room.  It was fun, too, because we were liberated from the burden of the order of service.  People kept interjecting ideas and that was just fine.  Instead of failing to produce a service in the sanctuary, we succeeded in having a spiritual moment in the Parish Hall.
We are also doing lots of work on our property, at the urging of our sexton.  We've upgraded the outdoor lighting and we're putting in a new walkway and entrance.  It's going to be grand and wonderful.
Three cheers for reinvention and reinvestment!
Posted by Mindy Thompson Fullilove at 3:50 AM No comments:

The Main Street of Monticello 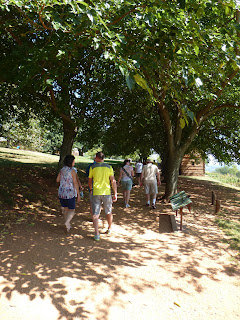 We were standing, our guide, Bill Bergen, said, on the Main Street of Monticello, along which were lined the homes of slaves and the many workshops where they made cloth, nails, furniture and other necessities of life in the young state of Virginia.  The slaves of Monticello made it possible for Jefferson to be a man of leisure, amassing the largest library in the United States, reading in seven languages, serving as a statesman and revolutionary.  I have always adored Thomas Jefferson, so I was shaken to my core by Bill's description of the experiences of slaves on Jefferson's plantation.  Bill, a lawyer, Civil War buff and retired UVa faculty member, is a stickler for data.  He shared with us material from slave narratives, Jefferson's letters, letters of other family members, and observations of visitors like the Marquis de Lafayette.  Jefferson, on one occasion, said that a slave was to be punished in a manner that would terrorize the other slaves on the plantation.  And he was to disappear in the night -- no one knows what happened to that man.  On another occasion, Jefferson, responding to the news that Jupiter, a man he'd known since they were boys together, had died, said that was too bad, but who was to look after the stables?  Bill had that genius of the storyteller to share the data with us in a way that helped us to see and feel what this treatment meant for the enslaved people.
I knew, of course, that slaves built Monticello and their work maintained it.  I also knew that slavery was horrific.  I had not connected all slavery with Jeffersonian slavery as in the syllogism:
Premise:  Slavery was horrific.
Premise:  Jefferson participated in slavery.
Conclusion: Jefferson's slavery was horrific.
Bill urged us all to grapple with this much more complicated view of the man, the times and the nation.  This is hard emotional work, as we let go of cherished illusions.  It gave me new sympathy for people who are further away from the reality of slavery than I am, because I did not want to know that Jefferson's overseers were brutal, that his slaves got two pieces of clothing a year and were expected to raise their own food if they wanted to get along.
Thank you, Mulberry Row, Main Street of Monticello, for educating me.
Posted by Mindy Thompson Fullilove at 6:34 AM No comments: