Last night I watched Horton Foote's Main Street. The movie has a strong cast, headed by Colin Firth and Orlando Bloom. It examines a moment in the life of Durham, North Carolina, hanging on by a thread and offered the lifeline of toxic waste storage. Mr. Foote, who wrote the screenplay for Trip to Bountiful and adapted To Kill a Mockingbird, was noted for his explorations of the lives of ordinary people facing ordinary life events. In the case of Main Street, people are facing the collapse of the city, after the decline of the tobacco industry. In this case he takes us into the confusion of the old, the grief of the middle-aged as their children move away, the frustration of young people who have to leave for a future. He also examines the ever hopeful search for a future for the city, so desperate that its leaders are even willing to consider bringing toxic waste to town. Main Street is a tidy a summary of what I've seen in my trips.
Posted by Mindy Thompson Fullilove at 6:26 AM No comments:

Rutland's "Art in the Park"

Today I went to see the 50th annual "Art in the Park" in Rutland, Vermont. The Chaffee Art Center is the organizer of the event which takes place in Main Street Park in August and October. It is a juried event, with over 100 exhibitors of arts and crafts, as well as local foods. The park is a block-square grassy space, just big enough to house the exhibits, but not so big that the visitors got lost in the space. We had a good time browsing and chatting with artists, then went to see Merchats' Row, the old Main Street of Rutland. One side of Main Street was tranformed into a mall, the other side looks like 19th century Vermont. Neither is holding its own against the movement of traffic and commerce to the wide and busy Routes 7 and 4, which dominate the flow in the area. They are classically ugly American shopping highways, no charm, no distinction. Driving around the Rutland area, including Killington and Okemo ski areas, gave me the distinct impression that tourism in Vermont has taken a hit from the long recession. As we were driving back from the movies in Rutland, my granddaughter pointed out Evenint Song, a farm where she and other campers had helped with weeding and making a swimming hole. These are young farmers, getting started, with signs in front of their farm saying "Join our CSA." I'd bought from them at the Ludlow Farmer's Market two days before. Good stuff, beautiful varieties and great taste. If necessity is the mother of invention, we may be for many new approaches in years to come.
Posted by Mindy Thompson Fullilove at 7:06 PM No comments:

I'm on my "busman's holiday," actually spending a week staying on Main Street in Ludlow VT and getting around to visit new Main Streets in the area. So far, I've been to visit North Bennington, South Londonderry and Woodstock. Vermont, though known as a rural and agriculture state, has a strong networks of cities, towns and villages. As far as I can tell, these places all have an old mill by a fast-running stream or river. Milling for lumber, paper and cloth were found throughout the state. The state deindustrialized early and only a few mills are still in existence. North Bennington is exemplary in still having a variety of industries that employ local people: much needed throughout the nation. In this state, the loss of industry is a stark fact, present in every Vermont urban center. Not that it's all work: Vermont has neatly placed state parks within minutes of the city centers. Today we went hiking in Okemo State Park to see Buttermilk Falls. My grandson Javi, 7, was pretty sure that Big Foot was lurking behind the trees, but we didn't see him.
Posted by Mindy Thompson Fullilove at 7:16 PM No comments: 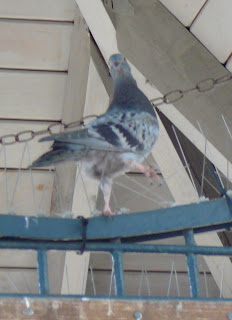 This summer has been a time to stroll on my local Main Streets, Main Street in Orange, Valley Road in the Valley, and South Orange Avenue, in South Orange. Mazzi Dogz has the best ice coffee, Main Street Orange the richest, most diverse collection of things and people, and SOAve the nicest plaza. I had a delightful time one morning eating a bran muffin from Cait and Abby Bakery and watching a pigeon position himself so as not to be bothered by the anti-pigeon wires on the plaza's gazebo.

It's also been a great time to make trips and see new Main Streets. I've been to Hudson, NY, which just got mentioned in the NY Times as Williamsburg in the Hudson Valley. I went to see David Dew Bruner, at David Dew Bruner Designs. David is a member of the faculty at the New York Botanical Gardens Landscape Design program, and I've taken several classes with him. He's a dazzling teacher, slowly unlocking the mystery of design from the blank page to the buildable garden. His store is filled with treasures. I found a big pile to tools that looked like old compasses to me. "Do you know what that is?" he asked. "A compass?" I responded. "No, it's a caliper, for measuring off equal distances." He showed me how it worked, and how it could be hung on the wall, and how it looked like a person. It was old and worn, felt good in my hand, and seemed like it would be at home on my desk, so it came with me. David had information about everything, and for everybody. It was a feast of possibility to be in his store. He told me about Hudson and its evolution from river port town, to industrial town, to disinvested town, to gentrified town. It's hovering now, looking for direction. David posed for a photo in front of his window, which was featuring sculptor Lee Musselman's piece, "Playing in a Rose Garden." 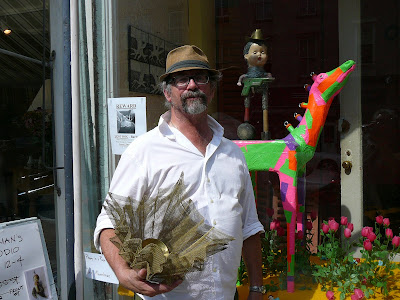 I also went to Saratoga Springs, which I've visited before. Main Street has been swallowed by the mall, which makes it a peculiar hybrid. It's one of those Main Streets that has nearly severed its physical connection to the surrounding city. But the Saratoga Spa State Park is extraordinary and very true to its origins, as the public's spa. I had a 40-minute mineral bath that was Nirvana, and a massage that made everything better. The best thing about it was the reasonable rates. Irresistible: thank you, New York.

I returned to Johnstown, New York, an Adirondack city famous as the home of Elizabeth Cady Stanton, one of the leaders of the movement for women's emancipation. It is an historic old city, a former home to Knox Gelatin, but now severed from its industrial past. It's not had much gentrifiction and is looking for an honest future. I was sad that a nice bookstore I'd seen opening its doors last summer was closing them on this visit.

Along with a group of urbanists, I went to Brownsville, in New York City, to visit the Brownsville Partnership, a program promoting health through exercise and better nutrition. We learned about their programs and toured the neighborhood. it is an exciting and walkable place. We also got to see the famous Pitkin Avenue, which is one of the great streets of New York. Almost as much fun as Main Street in Orange: I felt right at home. We were thrilled by a stunning fountain, in beautiful perspective, in the middle of the housing projects, for which the neighborhood is famous. Our group was unable to resist the chance to catch a bit of cool on a very hot day. Rarely have I seen a more perfectly placed fountain in the US. 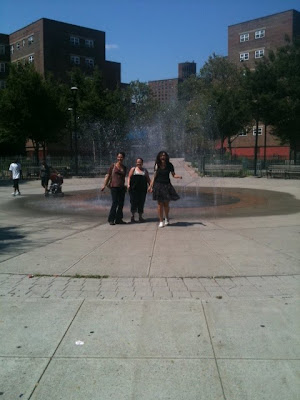 Then, yesterday, I went to Asbury Park as part of the University of Orange Summer Session on the Elements of Urban Restoration. We had a tour organized by Interfaith Neighbors. I got to appreciate how Asbury Park is permeated with music. The scene from which Bruce Springstein emerged is alive and well and making it happen in Asbury! Their boardwalk is the most open, most diverse there is. The Jersey Shore is horribly segregated by Asbury is for everybody. Somehow the city is managing to find new life, despite having been mauled and kidnapped by 1960s urban renewal.

Asbury's slow revival points to the future for all the places I've been. It's hard but it's possible. These might be the terms of success: 1) Yankee ingenuity (this is generic, the ingenious person doesn't have to be a Yankee), 2) cooperation, 3) interconnection, and 4) tapping the wellstone of local history and culture.

Posted by Mindy Thompson Fullilove at 1:48 PM No comments: