Hirofumi Minami, David Chapin and I are doing a psychoanalysis of Broadway in five sessions. We chose to start our fourth visit at Zabar's, the iconic store on Broadway. Zabar's website proclaims, "New York is Zabar's...Zabar's is New York." While admittedly smaller than Times Square, I think it might rival it in its iconic status -- at least to insiders, most of whom don't go to Times Square and do go to Zabar's. We resisted the siren call of croissants, coffee, cheese from every nation on earth and a huge selection of cookware. Instead, we strolled up Broadway. As we were on the subject of icons, we got into a deep discussion -- which continues -- about the possibility that there is ONE iconic photo of Broadway. We all tried to imagine what it might be, and then to take that photo. I asserted that the iconic photo of Broadway was a crowd of people. That section of the Upper West Side is just full of people, bustling along and enjoying The City. In the spirit of eternal flow of people, I really enjoyed the McDonald's Walk Up Service, largely advertised on banners that you can see from far away, and pleasantly just there when you actually are parallel to it. 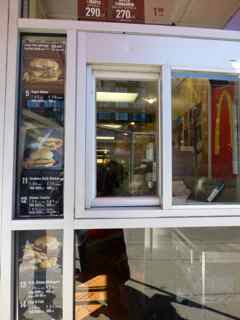 A walk-up service is not something McDonald's offers at all locations--in other places, like Orange Main Street, McDonald's alters the pace of the street by inserting parking and drive-through service. To be part of Broadway, McDonald's turns toward the walker. Broadway more powerful than McDonald's!!!! Perhaps my photo is the iconic picture of Broadway. Somehow, I managed to convince my dear friends that Pain Quotidien deserved our patronage again! I love that chain, and its store, also carefully inserted in Broadway, was packed with people enjoying good lunch. I had warming and satisfying black bean soup and yummy bread. David shared quiche with us. I was grateful for my friends's indulgence. Since B'way 4, Hiro worked out an ingenious tool for studying our materials. He invented the "scroll," a series of powerpoint slides, like a roll of 35 mm film, that unfurls the walk and is accompanied by ideas stimulated by the experience. He invited all of us to join him in this activity, adding pictures and words to his file. It is profoundly satisfying as a way to assemble what we saw into something manageable. We have settled on this "start with an icon" thesis and so B'way 5 will start with the Dyckman Farm House in Inwood.
Posted by Mindy Thompson Fullilove at 2:58 PM No comments:

David Chapin, Hirofumi Minami and I walked a third segment of Broadway on January 7, 2013. We were joined by Scoot Lizama, a graduate student at CUNY, with years of experience looking at and photographing the urban landscape including the entire length of Broadway. Hiro had said that the image of New York, for people from other countries, is the image of Times Square, so we went to see that part of Broadway. We started at 47th Street, which is just above the square, and walked south, into the blare of lights. It was a cold morning, so it was not packed with people as it had been on New Year's Eve or as it would be on any warm day. The new open spaces made it possible to stand and examine the Square. There was much to see. 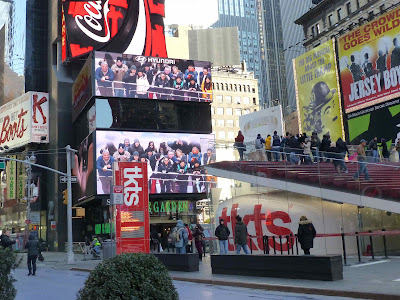 We watched people on the tkts stairs who were looking at themselves on television -- it was a car commercial and at the end, all the people were in the car driving away (notice the girl in the yellow jacket on the stairs and on the screen). David proposed that all the women on all the ads were lightly clad, young and beautiful. This lead to a careful examination of the giant signs. One stood out as having very normal women of many ages, and in clothes. That sign asked, "What will you do in 2013?" and then showed people who had given various answers like, "Forgive," "Be home to read bedtime stories to my children." As these were all things I thought I would do in 2013, I liked it a lot. We learned, by watching the whole thing, that this, too, was a commercial, this one for the Church of Jesus Christ of Latter-Day Saints. As it hovered over the statue of Father Francis P. Duffy, who tended to the poor and destitute in Times Square, I argued that it represented a continuity of ministry. We enjoyed debating both these topics -- the use of women in advertising and ministry in Times Square, but we were getting cold and hungry for lunch, so we strolled on. We stopped to look at another billboard, apparently from a China trade mission, that give the history of silk over many millennia. I was telling David about how different this billboard was when it switched to young, scantily-clad, beautiful women in silk. It was a relief to walk south of 41st Street and enter "normal" New York. I don't think I'd ever considered Broadway in the 30s quiet, but by comparison to the assault of Times Square, it's wonderfully peaceful. Lots of people had settled into various seats in open spaces, and especially where there was a bit of sun. I saw two unconnected people who were next to each other, both, I thought, on their phones. As this has become an iconic image of our time, I was watching them. I realized that the guy was not on his phone, he was scratching a lottery ticket. I wished him well and reminded myself to guard against cliches and assumptions. We had lunch in a Korean restaurant. Hot soup hit the spot, as we'd been very cold. We reflected on all that we'd seen, and appreciated the quiet and spacious restaurant as respite from New York's Main Street and its neon heart.
Posted by Mindy Thompson Fullilove at 5:25 AM No comments: