In Root Shock, the first volume of my urban restoration trilogy, I proposed that the key to a just and sustainable future was an "aesthetics of equity." In such an aesthetics, we would find the signs of inequality to be unattractive. For example, we would not celebrate the beauty of something because it was gilded. Nor would we love a statue that paid homage to someone who violated our values.

We have taken many steps in the direction of this aesthetics in recent years. One that I read about in the New Yorker -- "Britain's Idyllic Country Houses Reveal a Darker Narrative" -- was particularly shocking. It gave details of the ways in which slavery created the wealth to build fabulous mansions.  The article made the case that seeing the story behind the wealth made the oohing and aahing over its trappings a new experience. The illustration that accompanied the article said it all, juxtaposing the iconic drawing of ship packed with people to be sold into bondage with a father and son traipsing through a mansion to see its splendors. 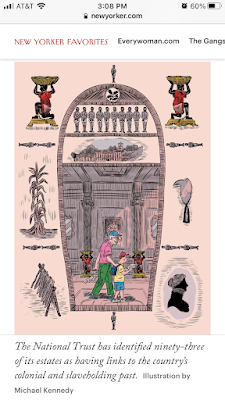 In a somewhat similar vein, an article by Roberta Smith in today's New York Times about the painter Chuck Close explored how we might think about his work in light of the revelations of sexual harassment. Are we to stop looking at his paintings because of those revelations?  She argues perhaps not, though we should know his story.

I have thought about this issue a lot because it was revealed that my most beloved college professor -- Dr. Herbert Aptheker -- had molested his daughter Bettina. Dr. Aptheker's work is of monumental importance, but we can't just brush aside his crimes. Had he been convicted in his lifetime, he might have gone to prison, served time, and re-entered society, as millions of people are now doing. Are we to never forgive any of them? Will we discount whatever they do because of their crimes?

This is why we need an aesthetics of equity. I do think that the question of forgiveness for crime will find a place in this philosophical endeavor. There is much to be explored. In the meantime, we can look skeptically at the houses of the rich and famous and wonder where the filthy lucre came from.

Just as yin and yang are opposites, but always in relationship to one another, might we have an aesthetics that is non-dualistic, which sees good and evil as parts of the whole?